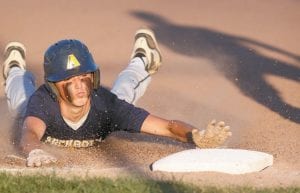 Above: Mitch Grosjean slides into third during the first inning of Archbold’s state tournament game with Miami East, Saturday, July 9. Right: Rigo Ramos is congratulated by Bryson Taylor (22) after crossing home plate in the second inning, which gave Archbold a 10-0 lead. The Streaks recorded a 16-0 shutout against the Vikings, but then lost 11-1 to St. Francis in the state semifinals on Sunday, July 10.– photos by Mary Huber

The Blue Streaks, who finished with a 24-7 record, shut out Miami East 16-0 in the quarterfinals, Saturday, July 9.

The Streaks exploded for eight runs in the first inning, scored two in the second, two in the third, and four in the fifth for the easy win in the quarterfinals.

Bryson Taylor was the winning pitcher. In two innings he allowed no runs on one hit (a single), struck out four, and walked none.

Archbold recorded 10 hits, and were led by Chase Kohler, who went 3-4 including two singles, a double, and three runs batted in.

The Vikings (9-5) committed six errors, including three in the fifth inning. 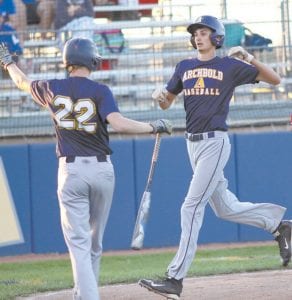 The Knights turned the tables on the Streaks in the semifinals, leading 8-0 going into the bottom of the second inning.

Archbold scored its only run in the bottom of the second. Mitch Grosjean hit a single to center field, and advanced to third on a passed ball. Ramos’ groundout to second allowed Grosjean to score.

St. Francis scored single runs in the fourth, fifth and sixth innings for its total of 11.

The Knights finished with 15 hits to four for Archbold.

Grosjean recorded a double, while Clay Nafziger, Chase Kohler, and Elijah Zimmerman each had singles.

Rigo Ramos was the losing pitcher.