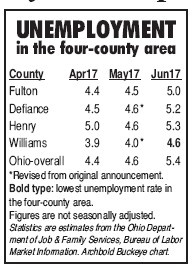 Unemployment rates for June were up in all 88 Ohio counties, the Ohio Department of Job & Family Services said.

It was the smallest jump in rates in the four-county area. Henry County unemployment went up seventenths (.7) of a point, to 5.3%; Defiance and Williams counties went up six-tenths (.6) of a point, to 5.2% and 4.6%, respectively.

Fulton County was in a five-way tie for 53rd-highest unemployment rate in the state. Other counties with 5% unemployment in June were Morrow, Seneca, Ashland, and Wood.

Meigs County had the highest rate, at 8.2%. It was the first time in at least 17 months Monroe County, also in southeastern Ohio, did not have the highest statewide rate.

All county unemployment data is not seasonally adjusted. Comparable June unemployment figures for the state and the nation were 5.4% and 4.5%, respectively.

When the figures are seasonally adjusted, the Ohio rate is reduced to 5%; the national rate is 4.4%.

There were more than 5.5 million Ohioans who were employed, making the total state labor force more than 5.8 million.