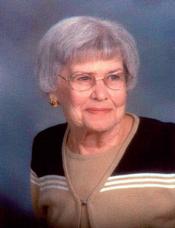 Joyce M. Kramer, age 83, of Archbold, passed away Tuesday evening, July 2, 2013, at Defiance Area Inpatient Hospice.
Her first job was to serve as a secretary to Judge Newcomer in Bryan.
She then became a bookkeeper at the Ohio Gas Company, where she worked for 34 years.
After retirement she volunteered at Sauder Village for many years.
Joyce was born in Sherwood on Sept. 2, 1929, the daughter of the late Ralph and the late Esther (Lipp) Parker.
In 1948 she married Robert L. Kramer, and he preceded her in death in 1994.
She was the valedictorian of the class of 1947 at Stryker High School.
Joyce was a longtime member of the Archbold United Methodist Church. She was an avid golfer and loved to quilt.
One of her fondest times was getting to meet Garrison Keillor.
Surviving is her daughter, Kathy Kramer of Archbold; granddaughters, Sarah Renz, Julie Eis, Amy Sloan and Becky Martin; one great-grandson, Stone Eis; great-granddaughters Destiny Eis, Amanda Rufner, Courtney Fenton, Callie Miller and Joshlynn Martin; and one sister, Mary Lou Short of St. Petersburg, Fla.
She was preceded in death by her husband, Robert; both parents; daughter, Carol Hancock; great-granddaughter, Aubrey Renz; two sisters, Dolores Robertson and Nancy Hyatt; and infant brother, Robert.
Visitation will be held from 10 a.m. until 12 noon on Saturday, July 6, 2013, at the Archbold United Methodist Church, where the funeral service will follow at 12 noon, with the Rev. David David, officiating. Private interment will be at a later date in the Archbold Cemetery.
The family requests that memorial contributions be given to Defiance Area Inpatient Hospice or the Archbold United Methodist Church.
Online condolences may be offered to the family at www.grisierfh.com. Grisier Funeral Home in Archbold has been entrusted with arrangements.-Posted 7.5, 10:10 am