A section of boardwalk, under construction, in Goll Woods.– courtesy photo

The highest rank in the world of Boy Scouts is the Eagle.

Archbold Boy Scout Troop 63 has had a lot of luck advancing scouts to Eagle rank.

At the board meeting, Josiah explained a board made up of other Eagle Scouts questioned him to determine if he has earned the right to become an Eagle.

To qualify, a Boy Scout must have earned the rank of Life Scout and held it for six months. He must also complete the work required to earn 21 merit badges, and complete an Eagle project.

An Eagle project is a community service project. The scout must come up with the idea for the project, research it, obtain permission to do the work, raise the money, and then do the work to complete the project, either by himself or with the help of fellow scouts, friends, and-or family. 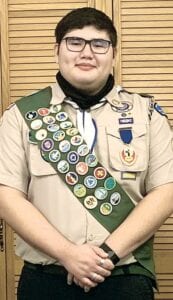 He also added 100 feet of boardwalk to one of the hiking trails in the woods.

“There was a section where there was a gap (in the boardwalk). I covered that up,” he said.

Some of the work was completed in July.

“We just finished the boardwalk on Sept. 6,” he said.

He said he had help from members of Troop 63, “and from friends and family.”

All told, about 20 people worked on the project. That helped them finish the work faster than expected.

“We allowed for about eight hours, and we only went for a good five,” he said.

Josiah said he’s wanted to earn his Eagle Scout rank since he joined the Boy Scouts.

“In Cub Scouts, I got the highest rank there, the Arrow of Light,” he said.

“I wanted to get my Eagle Scout because it looks good on resumes. Plus, I might as well finish what I started.”