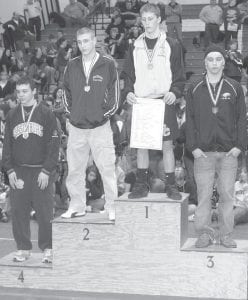 One more step in the journey of Archbold wrestler Jordan Cowell is now complete.

Cowell’s next stop: the state wrestling tournament at the Jerome Schottenstein Center on the campus of the Ohio State University in Columbus.

Cowell was the lone Blue Streak wrestler who advanced to the state tournament.

Despite a disappointing championship final, the young Streak has determination in his eyes, a determination that could put him on the podium at the state meet.

“It feels good to be going to state again,” said Cowell. “You can’t feel bad. Hopefully I can place in at least the top four.”

Coming out of the Archbold sectional with a number one seed, Cowell squared off against Swanton’s Don Johnson, a fourth-place finisher at the Elmwood sectional. Cowell registered a fall at 2:44 and advanced to the quarterfinal, where he faced New London’s Jacob Amburgy.

Cowell lost a close 3-1 decision to South Central senior Payton Oney in the championship match. “If I meet him at state I will beat him there,” said the AHS sophomore. Cowell’s first opponent at state is McComb’s Chris Osborne, a 36-5 senior.–photo by Scott Schultz

Cowell recorded a 17-0 technical fall to move into the semifinal, where he faced Elmwood’s Nic Hernandez, a senior who entered the district meet with an 11-8 record.

Cowell won a 13-3 major decision, securing a trip to Columbus and putting him in the championship match, where he met South Central senior Payton Oney.

Cowell, rated seventh in the Brakeman report, had his hands full with Oney, who is rated ninth. After a scoreless first period, Cowell started the second in the down position. The sophomore scored on an escape and held a 1-0 lead to start the final two minutes.

Oney, who showed frustration in the match, took the down position to start the third. He knotted the score at 1 with an escape of his own.

Cowell countered anything Oney threw at him, but just as time expired Oney scored on a takedown to claiming a 3-1 district championship.

“I thought I went out and wrestled decent,” said Cowell. “He couldn’t take me down, but I wasn’t able to hit my switch-up move like I did at sectional.

“If I meet him at state I will beat him there.”

“Jordan was real close to scoring in the first period. Both are pretty evenly-matched kids; we have some things to work on this week.

“(It was) a little questionable on the takedown, but you can’t put the match in the referee’s hands. Hopefully it makes Jordan hungry to get in the finals this weekend.

“His last match will give Jordan confidence that he can wrestle with anybody in his weight class. That is the biggest thing– thinking you can win.”