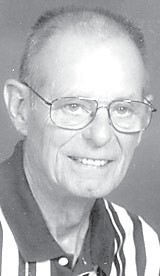 He was a 1950 graduate of Archbold High School, where he was a star basketball player.

In 1951, he joined the U.S. Navy and proudly served during the Korean Conflict. He was honorably discharged in 1955.

He married Mary Alice Leupp on Sept. 29, 1956, at the Archbold Evangelical Mennonite Church.

John was employed at H.L. Fraas Plumbing and Heating, Inc., for 45 years. When Ed Fraas retired, he purchased and ran the business until his own retirement in 1997.

John enjoyed golf and hunting. However, his passions were fishing and woodworking.

He spent most weekends at his cottage in Clear Lake, Ind., for many years. He also spent many hours in his woodshop.

He was a proud member of the Archbold Post of the American Legion, and spent many years in service there, until his health prevented it.

He was a member of the Archbold United Methodist Church.

In addition to his parents, he was preceded in death by his stepmother, Dorothy Givens Clair.

A funeral service celebrating the life of John will be held on Friday at 2:30 p.m. at the Archbold United Methodist Church, with pastors Jim Nathan and Reid Short officiating. Burial will be at the Archbold Cemetery.

Family will receive friends at the Short Funeral Home from 4-8 p.m. on Thursday.

In lieu of flowers, memorial contributions can be made to Heartland Hospice Care or the Archbold United Methodist Church. www.ShortFuneral Home.com.