Jim Wyse: A Life Of Service 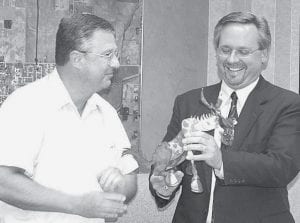 Dennis Howell, Archbold Village administrator, left, presents the ConAgra “Trust Your Donkey” award to Jim Wyse, Archbold mayor and 2008 Citizen of the Year. The company gave Wyse the award, a metal sculpture of a donkey, for his help in keeping the plant open. The donkey refers to animals, actually mules, that carry people to the bottom of the Grand Canyon. In the years the mules have been on the job, they’ve never lost a passenger.- photo by David Pugh

The word “service” comes up often when Jim Wyse, Archbold’s 2008 Citizen of the Year, talks about himself.

“A lot of people in Archbold and the area find ways to be of service, through churches, through schools- I always took an interest in village operations and politics,” he said.

That interest led him to a seat on Archbold Village Council, and later, to the offi ce of mayor. Not bad for a guy who started out managing his family’s pizza joint.

Born in 1961 to Steward and Judy Wyse, his family lived in Archbold and Pettisville before moving to Wauseon, where he graduated from Wauseon High School in 1979.

At the time, his family had a chain of Tiny’s Pizza restaurants. After graduation, he took over management of the Archbold operation and moved into his grandparent’s basement- the house where he lived right after he was born.

The management job wasn’t his only work.

“I worked in a sporting goods store in Wauseon. I mopped floors at Ickey’s. I swept the law office floors. I did about anything I could for a few extra dollars,” he said.

“I started slow. I started selling life insurance, then got into health insurance.”

Eventually he specialized in the health insurance field, where he still works today.

That same year, in March, he married Janet Plassman, and they had four children: Ashley, 23, who attends graduate school in speech pathology; Josh, 20, a sophomore computer science major at Miami University; Betsy, a 16-year-old AHS junior; and Stuart, a 14-year-old eighth grader.

His first run for public office was for mayor in 1999, an election he lost. Two years later, in 2001, he won a seat on council.

What Jim didn’t know at the time was that he had been preceded in politics by his grandfather, Lester “Les” Wyse, who was a member of Archbold council in the 1950s.

Les was asked to serve by a member of the Lovejoy family, the family of the late William “Bill” Lovejoy, an Archbold mayor for 20 years.

In fact, Wyse said he was first asked to serve on council by Bill Lovejoy before that first run for mayor.

“They had an opening and they needed to fill a seat. I told him I didn’t think I was ready,” Wyse said.

Wasn’t he concerned that his political activity would harm his business?

“I was. Some people who were in business and on council shared some stories where it did not work well.

“And it has not always gone well. It’s a by-product of public service. You can’t please everyone,” he said.

Wyse can list several accomplishments while in office. As is typical, he claims no individual credit for himself.

Of course one of the biggest was the “rescue” of the Archbold ConAgra Foods plant. The company announced plans to close the Archbold factory, but then, almost a year later reversed its decision.

He said he can still vividly remember the knots in his stomach the day he was told ConAgra was leaving Archbold.

Wyse said he approached Shaun Ferguson, then Fulton County economic development director, and asked why Archbold wasn’t getting any of the new business developments and additional jobs in the county.

“He showed me a list of new jobs, and every one had gone into an empty building.

“He (Ferguson) said, ‘You don’t have any empty buildings.'”

“Be careful what you wish for,” Wyse said. Today, after some factory closings, Archbold has building space available. One of those buildings, the former Young Spring & Wire, is now filled.

One accomplishment is the Northwest Ohio Educational Service Center’s decision to move into Archbold.

“I’m proud of that. We didn’t even have an empty building,” he said.

The office building will house about 200 workers with “very good-paying jobs,” who will pay the village income tax and might buy homes in the village.

He also talked about the 2005 downtown reconstruction project.

Council members were not all in agreement on the project, but those who were opposed decided to vote in favor to present a united front to the community.

Those who were opposed later agreed it was the right decision.

“Government worked. We were not in 100% agreement, but in the end, the majority was correct,” he said.

Wyse’s approach to problem solving is to meet face-to-face.

When he took office in 2004, relations between the Village of Archbold and the German Township Trustees were at a low point.

He invited the trustees to a council meeting and discussed the issues, “and we’ve tried to continue that dialogue, meeting this summer with the county commissioners, and inviting the township. We drove around town in a bus, discussing things we were working on,” he said.

“A lot of times when you have a strained relationship, the solution is to sit down together.

“Sometimes, it comes down to you agree to disagree, but meeting face-to-face can resolve a lot of misunderstandings,” he said.

Wyse and his family attend St. Martin’s Lutheran Church in Archbold, where he has been a past congregational president and currently serves on the ministerial board. His greatgrandfather originally joined the church 100 years ago, he said.

He said he looks at his work with the church as another way to give back to the community.

When he was a boy, he saw a park bench with a sign that said, “Welcome to Archbold, where God is still Number One.”

“I don’t know what happened to that park bench, but it made quite an impression on me.

“Church is such an important part of the Archbold community,” he said.

“I can assure you that on several occasions, when I had to speak at a press conference or meeting, in those last few steps, I prayed, ‘Lord, help me find the right words for this situation.'”

Wyse is also a past-president of the Archbold Rotary Club, a group he has been involved in for 15 years.

“Service organizations have a long history in the community.”

Those organizations are another avenue to provide service to one’s fellow man, he said.

Wyse remains humble about being named Citizen of the Year.

“I’m honored and very proud to be part of this community.”

He said he views the honor as “being named to an all-star team.”

“I’ve been lucky to be in the right place at the right time, to make a difference and a contribution to this community.

“Archbold has a long history of individuals making great contributions.”