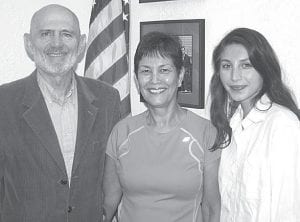 James Arden Ruffer, left with his wife, Margarita, and their daughter, Karen Rae, during an August visit to Archbold and the Buckeye office. During Jim’s 40-plus year career in the military, he served in the Marines, Navy, and Air Force. He flew combat missions in Vietnam, and played a key role in the rescue of an American hostage from a Panamanian prison in 1989. His father, an AHS grad, was a military pilot, and his brother was a Marine Corps officer.–photo by David Pugh

With Veteran’s Day upon us, we are called to think of those who have served our country in the armed forces.

Many men and women from the Archbold area have served, but few have had a career like that of James A. Ruffer.

Ruffer’s family has a long history of military service.

Ruffer, 67, is the grandson of Victor Guy Ruffer, who was born in German Township in 1895.

Victor Guy graduated from Ridgeville Corners High School. He served in the Army during WWI, returned, married, and moved to Archbold in 1929, where he operated a butcher shop and grocery store in downtown Archbold for 30 years, a Ruffer family genealogy states.

During that time, he played the trombone in several groups, including the locally famous “Rube Band.”

Jim Ruffer’s father, Victor Jack Ruffer, was born in Ridgeville Corners in 1921. He graduated from Archbold High School in 1938, and joined the U.S. Army in 1939.

During WWII, Jack, as he preferred to be called, specialized in codes. As a code specialist, he had knowledge of information that was so secret he could not risk being captured by the enemy. Because of that, he was not allowed to serve overseas.

After the war, he became a pilot, and spent much time flying air-sea rescue.

In an interview, Jim said the family moved several times, a common occurrence in military families. Included were stints in Hawaii and England. But Jack and Ruth Ann often returned to Archbold.

Jim joined the Marine Corps and became a pilot. He flew 92 missions over South Vietnam in the A- 4 Skyhawk ground-attack bomber, supporting ground troops.

The A-4, a relatively small, single-engine, singleseat jet, was a very maneuverable aircraft.

“I loved the A-4. Basically, there was a sense of unity with the aircraft,” he said.

Many of the A-4s that went into combat never returned. John McCain, U.S. Senator (R-Ariz.) was captured by the North Vietnamese after being shot down while flying an A-4.

Jim left the Marines and went to medical school in Guadalajara, Mexico, graduating as a physician and surgeon in 1977.

During his years in Mexico, he met and married his second wife, Margarita.

He returned to the military, joining the Navy and serving as a flight surgeon until 1985, when he left for private practice.

He returned again to the military in 1986, this time with the Air Force.

Jim said he and Margarita decided to take an assignment in Panama, for the country’s climate and so she could return to a Spanishspeaking culture.

During 1989, Kurt Muse, an American citizen, was living in Panama, where his family operated a business. He became involved in the country’s politics, becoming part of a group that set up clandestine radio transmitters that interrupted the broadcasts of the government of Manuel Noriega.

Muse was incarcerated in the prison for nine months, but under the Panama Canal treaty, the U.S. government made arrangements to visit Muse regularly to monitor his medical condition.

Jim Ruffer was selected for the job.

During their visits, Ruffer served not only as Muse’s doctor, but also his friend, confidant, and contact with the outside world.

Jim also collected detailed information about the prison, including the number of steps from one point to the next, and the exact type of lock on Muse’s cell door.

The information was used by U.S. Army Delta Force to stage a helicopter-born rescue of Muse during the first night of Operation Just Cause, the American-led overthrow of the Noriega regime, on Dec. 20, 1989.

Jim continued his military career, and served in Saudi Arabia during Desert Storm in 1991. He retired from the military in 1995, and retired from private medical practice in 2002.

He, too, was a Marine who served as an officer in Vietnam, where he was wounded in action. He retired from the service in 1981.

Today, Jim is retired, having reached the rank of Colonel. He and Margarita live in Las Vegas, Nev. He has 10 children by his two marriages, and several grandchildren.

In all, he spent about 40 years in service to the country. He, his father, and his brother made careers of their military service, taking on dangerous assignments in foreign lands.

We ought to do good to others as simply as a horse runs, or a bee makes honey, or a vine bears grapes season after season without thinking of the grapes it has borne.–Marcus Aurelius

Determine never to be idle. No person will have occasion to complain of the want of time who never loses any. It is wonderful how much may be done if we are always doing.– Thomas Jefferson

Until the 1800s English husbands gave their wives New Year’s Day money to buy pins and other articles. The custom disappeared but the term pin money still means small amounts of spending money.

The word “ballad” comes from the Italian ballare, meaning “to dance.” Ballads were originally songs sung to dance music.