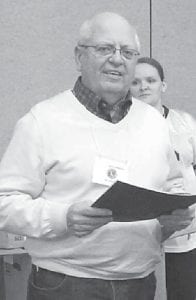 Jerry Rohrs, rural Archbold, had no idea what he was in for when he attended the Lions Club District Convention banquet, Friday, April 8.

Karlin Wyse, Archbold, said he persuaded Rohrs to attend the event in Lima, saying he didn’t want to go by himself.

While they were sitting there, it was announced that Rohrs had been named the “Lion of the Zone” for 2015-16.

Each year, each club is asked to nominate someone special for the award.

“He (Rohrs) has held every office (in the local Lions Club) except treasurer. He’s been president twice, and was chairman of the Carp Festival committee for many years.

“For the last 18 to 20 years, he’s been full force with the county furniture program.”

The program collects used furniture, stores it in a warehouse in Archbold, then delivers that furniture to people who are struggling to make ends meet.

“He logs 10,000 miles or more annually on his personal truck and trailer,” Wyse said.

Wyse said he was able to get Rohr’s wife, Cecily, to attend the event, but said he had to tell her the truth– that her husband was being recognized.

Jerry Rohrs was named Archbold Citizen of the Year in 2012; Cecily was honored with the title in 1997.

Wyse said Rohrs was truly surprised when his name was announced.