Jerry Rohrs Is Citizen Of Year In Archbold 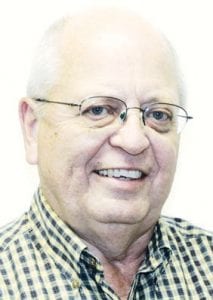 Jerry Rohrs says he isn’t mechanically inclined, nor is he much of an electrician.

But, he said, it doesn’t take much skill to pick up furniture.

He is one of the men involved in operating an informal exchange that matches furniture and major appliances with people who desperately need them.

For that work, and for other activities, Rohrs, who lives south of Pettisville, is the 2012 Archbold Citizen of the Year.

“There are some Archbold heroes among them,” he said.

Rohrs, a 40-year member of the Lions Club, was at the club meeting last week when Norm Beck, a club vice president, arrived and announced Rohrs had been selected “right there in front of everyone,” he said.

“I was shocked, I sat there in a daze for a little while.”

He joins his wife, Cecily, who was named the Citizen of the Year in 1997.

They are the first husband and wife to receive the award. Liberty Center

Rohrs is a native of Liberty

Center, where he grew up on a farm.

“When I was a kid, we used to bring hogs to the auction at Lugbill’s. I thought Archbold was a big city, with a big water tower,” he said.

He and Cecily graduated from Liberty Center High School in 1965.

He graduated from Ohio State University in 1969 with a degree in agricultural journalism, the first graduate of the program. He and Cecily, who had been friends throughout their lives, mar- ried when he graduated from OSU.

He spent two years in the U.S. Army, including 364 days in Vietnam.

Rohrs said he was in military intelligence. In Vietnam, he said he lived “out in the middle of nowhere, with the locals.”

“It was an interesting year.”

He returned to Archbold and went to work for O. Roger Taylor, publisher of Farmland News, as a writer and editor. It was a job he held 40 years.

He has been retired for six months.

“I highly recommend retirement,” he said.

For decades, Rohrs has been what some have called the “perpetual” co-chair of the Archbold Carp Festival, a Lions Club event held in July.

There are several activities at Carp Fest. The Lions Club puts on a fish fry and holds an auction each year.

While not a huge moneymaker, Rohrs said the event is mainly intended to be a family fun night in the park.

His first calling, however, is his work with the furniture program.

It started about 12 years ago, when Paul zumFelde worked at Lutheran Social Services. Rohrs said zum- Felde heard of some people in Napoleon who needed a dryer. He asked Rohrs and another man to help move it.

Now, the furniture program, a “very loose” group, accepts furniture donations and stores items in warehouses in Archbold. On Saturday mornings, Rohrs said there are as many as 10 to 60 people waiting, looking for anything from a bed or sofa to a washer-dryer set.

People who come to his group for furniture can’t afford to buy what they need.

“They can’t even afford to shop Care and Share,” he said.

“People may have lived months, or even years, without a bed, or a washer, or a kitchen table.”

They took a bed to a woman in Wauseon who had gone without one for a year.

“Over in the corner, there was a blanket on the floor,” he said.

“She was ecstatic” to get the bed.

The program caters to victims of fires who have lost everything, or those who have come out of domestic situations and are left with nothing.

The largest number of requests is for washer-dryers, he said.

Someone may spend $15 a week or more taking their clothes to a laundromat; with their own washer and dryer, they can save that much money.

It takes donations to make the furniture program work. Rohrs said there are about five requests per donation.

Those involved with the program will go to the donor’s home and pick up the donations.

“We say sleeper sofas (very heavy, because of the metal framework) migrate to the basement. Nothing makes a Saturday morning like a sleeper sofa in the basement,” he said.

“There’s something sort of cool about being able to take that thing that somebody has no use for, and give it to somebody who really needs it.

“It’s sort of a magical feeling.”

Rohrs said he doesn’t know exactly what to say about being chosen Citizen of the Year.