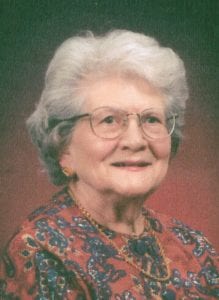 Jane Ann Bell, age 93, of Wauseon, died Monday, July 26, 2010, at Twin Rivers Care and Rehabilitation Center on Defiance.
Jane was born in Archbold on July 21, 1917, the daughter of Otto and Irene (Nofzinger) Kluepfel.
Throughout her school years she was musically gifted, playing clarinet, oboe, saxophone, violin and piano. She graduated from Archbold High School on 1935, at the top of her class.
On June 26, 1935, she married Hal Sinclair Bell, who died on Feb. 5, 1986.
She was a homemaker and very active in church and community functions. She was a lifelong member of Trinity Lutheran Church in Wauseon, which was started by her paternal grandfather, Rev. Peter P. Kluepfel.
Among organizations she was involved in was the Mary Martha Circle, in which she served as secretary, Young Generation at Trinity, and co-ordinater of Meals on Wheels.
She served as a board member of the Fulton County Health Center Auxiliary, and in 2005 was awarded for 4000 volunteer hours at FCHC.
In earlier years, she worked the election polls, served as an officer in CCL, was a Red Cross Volunteer, and also a Den Mother. For a brief time she worked at the Fulton County Extension Office.
Her passion has always been cooking and baking. She was especially known for her pies and baking German Christmas cookies for the entire family which she did as recently as three years ago.
She is survived by one daughter, Laurie (Al) Moll of Defiance; two sons, Dr. John (Pat) Bell of Hudson, Ohio, and Jim Bell of Archbold; nine grandchildren, John Bell III, Heidi Faller, Chad Moll, Sinclair Bell, Toby Moll, Cortney Badenhop, Joshua Bell, Heather Bell, Lindsay Bell; and 10 great-grandchildren.
Besides her husband preceding her in death, were a son, Pete (Sandy) Bell; an infant daughter, Connie Sue; grandson P.J. Bell; and one sister, Mary Lou Pape.
Funeral services will be held at 11 a.m., Thursday, July 29, 2010, at Trinity Lutheran Church, with Pastor Jen Herrmann, officiating. Interment will follow in the Wauseon Union Cemetery.
Friends may call at the Edgar-Grisier Funeral Home in Wauseon on Wednesday from 2-4 and 6-8 p.m.
Viewing will also be one hour prior to the funeral service at Trinity Lutheran Church on Thursday.
The family requests that memorial contributions be given to Trinity Lutheran Church or the FCHC Auxiliary.
Online condolences may be offered to the family at www.grisierfh.com.–Posted 7.26, 7 pm