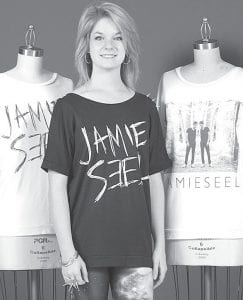 Jamie Seel, AHS ‘10, with some of the t-shirts she designed. Working toward a career in fashion design, she spent the past 13 months studying in Los Angeles, Calif. Shirts are just part of a line of apparel she is developing under her own “Jamie Seel” label.– photo courtesy Fashion Institute of Design & Marketing, LA

Who would ever think Archbold High School would be a place to start a career in the fashion industry?

“My philosophy is, ‘It doesn’t matter where you went. It’s what you make of yourself,’” she said recently in a telephone interview.

Seel, daughter of Chris and Corkey Haines, Ridgeville Corners, and James Seel, Grand Rapids, lives in Los Angeles, Calif., where she attends the Fashion Institute of Design and Merchandising, a private college specializing in fashion design, merchandising, costume design and other related areas.

She was an FIDM honor roll student in the winter and spring quarters, and hopes to be on the summer quarter honor roll.

Seel said she came to fashion by way of neurology, and automobiles.

While she was in school, Seel said she always wanted to be a neurologist, a doctor who specializes in treatment of nervous system disorders. 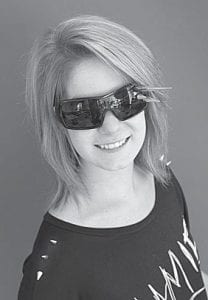 Jamie Seel wears a pair of her sunglasses with a futuristic look.– photo courtesy Fashion Institute of Design & Marketing, LA

But late in her junior year of high school, art suddenly became more and more important to her.

Initially, when she turned away from medicine, she chose automobile designing.

“My family was always interested in cars as I grew up,” she said.

“But halfway through my senior year, I started looking at the program and thought, ‘that doesn’t sound very interesting.’”

It was then she turned to fashion designing.

“That sounded cool,” she said.

She dived in head first, making her own senior prom dress.

After graduation, Seel attended the School of the Art Institute of Chicago. She soon decided to transfer to FIDM, because its program was shorter.

“Chicago was five years. At FIDM, I could finish in 15 months,” she said.

She has two weeks to go before graduation.

But, she said everyone in Los Angeles “seems so focused on being famous.

“For me, it’s more about personal success, instead of what everyone else sees.”

She doesn’t plan to make LA her home. She’s already planning a move to New York, which she thinks will be a better place to start her own business.

In fact, she’s already started her own company. The label is her own name, “Jamie Seel.”

She started out with highend sunglasses, but when it came time to start manufacturing, the expenses were too high.

So, as a way to cover her expenses, she started a small line of eco-friendly, made-in- America tee shirts.

“They’re soft and stretchy, with a chic fit,” she said.

But, she said, the shirts are just a fund-raiser.

Her look, or design aesthetic is “modern chic; a sleek look with surprising elements. Almost futuristic,” she said.

After finishing at FIDM, she will begin to aggressively market her products. Much of her marketing will involve simply going from store to store, shop to shop, showing off her line.

“I would like to be in higher end boutiques, but for now, I want my business to be successful enough to survive without a second job,” she said.