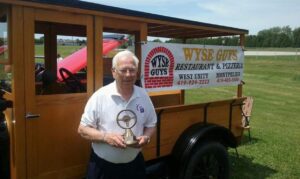 James L. Short, 83 years, of Archbold, passed away Wednesday, Dec. 30, 2020, in his home.
Jim (Chaulkie), as he was known by friends and family, was born Feb. 12, 1937, in Wauseon, the son of the late Jesse and Lucille (Lantz) Short.
He was a 1955 graduate of Archbold High School. He often joked he walked three miles uphill both ways to get to and from school. (He lived two doors down from the school!)
Jim married Barbara Nofzi-ger on June 25, 1961, in Pettisville. She survives.
He worked as a truck driver up until retirement. He told stories of driving a semi-truck to New York City and Chicago at the young age of 15 years old.
He worked with his dad and brothers Larry and Greg, at Blissfield Truck Line for many years.
He was also a proud, volunteer firefighter. He loved working as a firefighter, along with his brother Terry.
Along with his wife Barb, he attended Pettisville Missionary Church for many years before attending services at Fairlawn around the time his mother moved to assisted living.
Soon after that, he and his wife began helping on a regular basis with the Sunday services there, with Jim running the sound equipment.
Jim was a loving husband, dad, grandpa, uncle and great-uncle, and enjoyed the time he spent with his family.
Surviving is his wife of 59 years, Barbara Short of Archbold; three children, Cathy (Dave) Rowe of Delta, Jodi (Tom) Gerken of Archbold, and Beth (Matt) Wyse of Archbold; seven grandchildren, Lucas (Chelsie), Jarett, Kennedy, Taylor, Jackson, Tanner and Kayla; one great-grandchild, Theodore; one brother, Greg Short of Archbold; and one sister, Lynda Rychener of Arizona; and many beloved nieces and nephews and great-nieces and -nephews.
Jim was preceded in death by his parents; one sister, Nancy Riegsecker; two brothers, Terry Short and Larry Short; and his brother-in-law, Tom Rychener.
Burial will be private at Pettisville Cemetery.
The family asks that memorial contributions be made to the Archbold Fire Department, Archbold.
Online condolences may be offered to the family at www.grisierfh.com. Grisier Funeral Home in Archbold has been entrusted with arrangements.