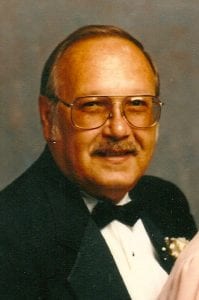 James L. “Jim” Davis, Sr., age 72, of Archbold, passed away on Wednesday evening, July 10, 2013, in his home.
Prior to his retirement in 2001 he had worked at ITT Industries in Archbold for 42 years.
Jim was born in Archbold on July 13, 1940, the son of Kenneth W. and Loretta M. (Schroeder) Davis, Sr.
On April 24, 1959, he married Pauline C. Thompson, and she survives. They were married for 54 years.
Also surviving are their children, James (Kathy) Davis, Jr., of Warner Robins, Ga., David (Ada) Davis of Archbold, Terry Davis of Archbold, Vicki Perez of Archbold and Billie Fonseca of Stryker; 12 grandchildren; three great-grandchildren; and one brother, Kenneth W. Davis, Jr. of Napoleon.
He was preceded in death by both parents and one sister, Marilyn S. Wheeler.
Visitation will be held from 11 a.m. until 3 p.m. on Sunday, July 14, 2013, at the Grisier Funeral Home in Archbold, where the funeral will follow at 3 p.m. Pastor Don Krieger will officiate. Interment will follow in the Archbold Cemetery.
The family requests that memorial contributions be given to the charity of the donor’s choice.
Online condolences may be offered to the family at www.grisierfh.com. -Posted 7.11, 3:45 pm