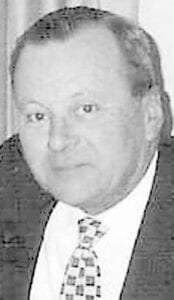 James was both a businessman and entrepreneur. He was the owner of Scott-Port-A-Fold Manufacturing in Archbold, as well as Mary James Children’s Clothing.

He enjoyed traveling and doing business in Mexico and Peru. His hobbies included playing tennis and racquetball, as well as playing bridge.

He also enjoyed law and international business relationships as well as being a private pilot. He was always extremely proud of his children, grandchildren, and great-grandchildren.

He served as a captain in the Air Force and was stationed on Chitose Airbase in Hokkaido, Japan for two years.

A private family funeral service, presided over by Rev. Eric McGlade, was held at 1 p.m., Tuesday, March 9, 2021, at Rodenberger-Gray Funeral Home in Napoleon. Interment was held at Glenwood Cemetery.

Memorial donations in lieu of flowers should be made to Henry County Humane Society or CHP Hospice.