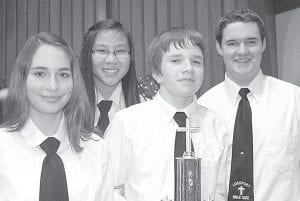 The team of “Plotted Against,” from Lockport Mennonite Church, was the highest-scoring team at the opening round of Northwest Ohio Bible Quiz action at West Clinton Mennonite Church, Sunday, Jan. 8. All four quizzed correctly in all three of their matches, averaging 163 points. From left: Cara Foor, Hannah Groeneweg, Caleb Short, Tony King.– courtesy photo

You know it’s Bible Quiz time when you see local youth carrying small scripture portions with them as they search for answers… this year, from the book of John.

The 2012 Bible Quiz season got off to a great start, Sunday, Jan. 8, at West Clinton Mennonite Church, with 85 quizzers.

Many of the sponsoring churches welcome area youth between the ages of 12 and 20 to participate on their church teams.

Placing third with an average of 148 points was Zion’s “AmIAJew?”Membersare brother and sister, Cameron and Hannah Short; Nathan Yoder; and brothers, Ben and Zach Zimmerman. Zion coaches are Stan and Sue Short.

“Strangers,” along with the top three teams, entertained the crowd by seeing who was the fastest at “rebuilding the temple” (John 2:19) with Jenga blocks.

The next meet is Sunday, Jan. 15, 2 p.m. Prizes will be given to the teams with the most enthusiastic fans. For more information, contact the new area coordinator, John Dinius, Archbold, or visit www.nwobiblequiz.org.