D.J. Neuenschwander
Special to the Buckeye 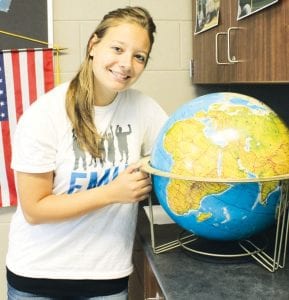 Carolina Raffaelli, of Pesaro, Italy, is a Pettisville High School foreign exchange student. She passed the Ohio Graduation Test, the test required for high school graduation in the Buckeye state, on her first try. She will receive an actual Pettisville High School diploma, as compared to the certificate of attendance that many exchange students take home.– photo by D. J. Neuenschwander

One member of the Pettisville Class of 2012 stands out from her classmates for several reasons.

Like her fellow graduates, Carolina Raffaelli passed the Ohio Graduation Test, or OGT.

Like many of them, she passed it on her first try.

But Raffaelli is the only one who had to take the test in what for her was a foreign language, and with only minimal time to prepare.

In August 2011, Carolina came to live with Lavon and Marie Hershberger, of rural Pettisville, from Pesaro, Italy, a city of nearly 100,000 located on the Adriatic Coast.

She entered Pettisville High School as a senior and enrolled in a full schedule of classes, including nearly all of the science courses the school offered.

But in order to pass the OGT, Raffaelli had to take the test in English and pass sections that would cover reading, writing, math, science and social studies.

“I was nervous about the test,” she admitted, “and worried a lot about the social studies part.”

While she had studied English as a student in Italy, she had very little study of American history, which was the focus of the social studies portion of the test.

“I was taking American Government here at Pettisville, and I met with the teacher for about a 15-minute tutor session to cover the highlights of American history,” she said.

“That was not very long to learn so much, but it did help.”

Raffaelli actually received her highest score on the social studies portion of the test.

While she will receive a diploma from Pettisville, Raffaelli will need to return to high school when she goes home to Italy because schools there require five years of high school for graduation.

Another difference that Raffaelli observed was that students in Italy generally choose a high school with a special focus depending on their interests and abilities.

Some students attend a ‘classic’ school that teaches subjects like ancient Greek and Latin.

One difference that Carolina particularly liked about school here was the inclusion of sports and special events like Homecoming and prom.

Although her only sport in Italy was through a club volleyball program, here she chose a sport every season: soccer in the fall, basketball in the winter, and track and field in the spring.

And as for the special events, she enjoyed them a lot, particularly Pettisville Homecoming, where her classmates honored her by voting her a part of the court as the senior class attendant.

“We don’t have that in Italy,” she said, “and I was a bit nervous about having to walk out there in front of everyone. But it was very special, and I liked it a lot.”

Other things that stood out as different here than in her hometown included the large shopping malls, colder temperatures, and the high number of fast food restaurants.

“In my city, I think there is one Burger King, but I have never been there,” she said.

“But here there are lots of fast food places. They are good tasting, but I don’t know if they are so good for you.”

She looks forward to traveling with the Pettisville Spanish Club to Peru in June.

“Spanish was a good class for me,” she said.

“Spanish and Italian are a lot alike, so it was easier than some of the other classes.”

Another class that Carolina enjoyed at Pettisville was anatomy and physiology.

When she returns to Italy, Raffaelli will finish high school and then plans to attend college with a probable major in a science field.

Carolina was surprised how many people here were Christians and how church played a large role in the lives of the students.

“I attended MYF at West Clinton Mennonite Church,” she said.

“I never went to anything like that at home, but here most of the students go, so I went too.”

She explained that most people in her home that were religious were Catholic, and she had not been involved with a youth group like the MYF program.

“It was different than I was used to, but it was good.”

Raffaelli said she was glad she came as an exchange student to Pettisville.

Becoming an exchange student and committing to stay abroad for a year was a challenge and adventurous. She learned a lot, and is sure her English language skills improved greatly.

When she returns to Italy in late June, Carolina Raffaelli will take home many good memories, along with a Pettisville High School diploma.

“If I could do it over again, I would still come here,” she said with a smile.

“It has been very good for me.”