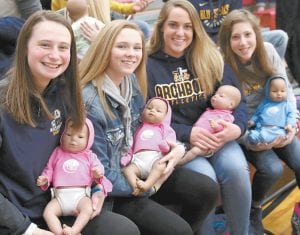 Senior Seminar participants– 60 in all– were participating in the infant simulator program provided through the Fulton County Health Department.

While it’s tempting to refer to the infants the girls were carrying as dolls, “They’re not dolls. They’re very high tech, as far as being able to sense head support, temperature,” said Andrea Oyer, Senior Seminar instructor.

“Definitely more than your average baby doll that somebody would be carrying around.”

The simulators are an outgrowth of the “Baby Think It Over” program that has been provided to schools by the Health Department for years through Family Consumer Science classes.

As schools have transitioned away from FCS classes, they have looked for ways to incorporate the program into students’ learning.

“’Baby Think It Over’ is the program. It has just evolved over the years to be more high tech,” Oyer said.

“This is the second year that the class has done them with me.”

Senior Seminar focuses on preparing AHS students for life after high school, and is offered during the second semester of senior year.

“Health and wellness is our current topic of study. (It includes) the infant simulator, choosing the best soulmate, services offered by the Fulton County Health Department, and a talk by a dietician. The students will be CPR (cardiopulmonary resuscitation) and AED (automatic external defibrillator) certified.”

New to the program this year is the concept of a “coparent.”

“Last year, each student was assigned a baby. You could have a babysitter key; somebody could help you.”

This year, “We each had a co-parent paired up with us, so one of you had to be taking care of it at any time,” Nafziger said.

“My sister had (the infant simulator) last year when they didn’t do the co-parenting,” Peterson said.

“When it was at home and she needed to go do something, she would give me or my mom the ‘babysitter band’ so she could just leave.

“This year, having a coparent, we had to actually communicate with another person and drive and meet them somewhere. It was a whole new aspect on the whole parenting thing.”

Each pair of students cared for their infant simulators for three days, and had to work together to coordinate their schedules so that their baby was cared for by one of them.

“That was the part where we had to work it out,” Miller said. “We had to talk to them and see which (‘parent’) could take care of the (‘baby.’)

“I thought that was just as important as actually taking care of the baby.”

But even having a co-parent wasn’t ideal.

“Especially with the time. We had to take them to the basketball game,” said Nafziger.

“They (the simulators) had to go if we wanted to go, so that was just another thing that you have more responsibility as you’re getting older, because we couldn’t just leave it anywhere.”

Having them all at the basketball game at the same time “made for a good experience,” Nafziger said.

“I thought it was easier,” Short said.

“You could sort of help each other,” Miller said.

“If you needed something, they knew what you would need and they would be able to help you out with it.”

“I had it most of the time,” Nafziger said.

“Yeah, same,” Short said. “My co-parent was in basketball so he’d have practice after school, then Wednesday night he wanted to sleep before his game, and Thursday he had a game, so I was the main caretaker.”

“My co-parent went to state wrestling, so he was gone the whole time. He was actually gone,” Nafziger said.

“There was no way I was getting it to him.”

“A lot of us had partners that were in basketball– the tournament– so they wanted good sleep the night before, so we’d have to take them,” Peterson said.

“So you had to work those issues out and communicate,” Oyer said. “I feel like that prioritizing– ‘I wanted to work out at the gym, but his priority was playing in district tournament’– that became a bigger priority, so you had to make those choices.

“A real parent does that all the time. Whose priority is bigger? Who can take the kid? Who can’t?”

“That piece of it that we missed out on last year is good, valuable experience, speaking from my perspective as a parent, said Oyer.

“Working out schedules and prioritizing things when you have children that come into play– it’s not just about what you want anymore.”

As stated on the Health Department parental permission slip, “The experience (with the infant simulator) is intended to demonstrate to my son or daughter the commitment required for parenting an infant and working with another person in making choices to provide for their care.”

Peterson said, “I think it was just teaching us how much of a big responsibility having a kid is, and the amount of time and care that you have to provide for them.”

Miller said, “I just thought it was to put the point across that we’re probably not ready as high school students to take care of a child on our own.”