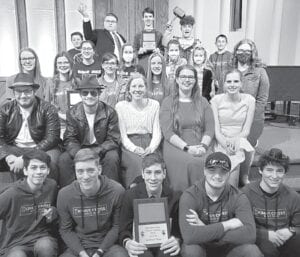 Bible Quiz provides fun incentives to study the Bible, like team practices and area meets involving 60 youths and many adults as staff and supporters.

A Bible quizzer can spend hours each week studying three to four chapters of scripture to prepare for a meet. In today’s world, for a young person to spend that much time in the Bible is a miracle in itself.

Northwest Ohio Bible Quiz is open to all youth, ages 12- 20, regardless of church affiliation.

On Sunday, March 14, five teams came into the last meet of the season with a chance to be the league champions if they could win their remaining matches.

Eastland Baptist and all three King’s Cross teams had only one loss, and a Central team had two.

Close matches and a couple of questions determined the final outcome.

“Walking Trees,” Central, also gave “Indubitably” a close match that was decided on the last question when Stephen Delgado quizzed out for a 115-95 win.

A third win with “Shackles and Chains,” Pettisville Missionary, gave “Indubitably” a 9-1 record and the season champion title.

“Sons of Thunder,” King’s Cross, won two, but lost to the “Underdogs,” Eastland Baptist, to finish 8-2 and finish second.

Four teams will travel to Kidron, Saturday, March 27, for a 15-team triple elimination tournament with teams from the Kidron and West Liberty areas.