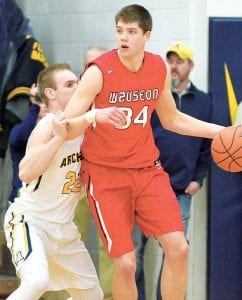 Austin Rotroff (34), who is 6 feet, 9 inches, towers over Archbold’s 6-3 Caleb Wooley as the Blue Streak guards the Wauseon senior. Rotroff led a quartet of Indians who scored in double digits; he finished with 18 points.– photo by Mario Gomez

Archbold took a step backward in its quest to regain the Northwest Ohio Athletic League title when the Streaks suffered a 67-56 setback to Wauseon, Friday, Jan. 19, before a sold-out house of 2,032 in the Thunderdome.

“Two teams competing at a high level. It was just a lot of fun.”

“You can see why they are the number-one team in the state,” said Doug Krauss, AHS head coach. ‘They’re the real deal; just very confident.”

Indians Get Off To Quick Start

Wauseon jumped out to a 5- 0 lead on Trent Armstrong’s jumper and a Brooks Gype three-pointer.

Rigo Ramos scored a basket, but the Indians ran off the next six points for an 11- 2 lead.

Bryce Williams scored a jumper and a three to pull AHS within four, 11-7, but Wauseon increased the difference to 12 points with an 8-0 run, forcing the Streaks to call a time-out.

Archbold then hit three straight three-point bombs to pull within three, 19-16, after one.

“One of the things we wanted to do was not allow them to get off to the start they got off to,” said Krauss.

“But we weathered that storm. We came back and played how we wanted to really play.”

Austin Rotroff and Gype regained the lead for Wauseon at 26-24 with a bucket and trey, respectively.

The Streaks stayed close and went into the half trailing 31-28.

Krauss: “That Team Is The Real Deal”

It didn’t take long for the Indians to grab the momentum in the third. A Rotroff dunk brought the Wauseon faithful to their feet for a 33- 28 lead.

Up 37-34, the Indians started to slowly increase the difference with an Armstrong three.

Williams scored a layup, but Levi Seiler answered with a three to go up 43-36.

Wauseon finished the period with a 7-5 advantage to take a 50-41 advantage into the final eight minutes.

The Indians then missed four straight free throws before Owen Newlove hit one for a 61-50 lead, but Williams drained a three to pull AHS within eight, 61-53.

After a pair of free throws from Gype, Williams hit another three. They were Archbold’s final points.

Seiler scored on a breakaway layup and the Indians hit two more free throws for the 67-56 final.

“We talk a lot about come out and enjoy the moment,” said Burt. “It’s a great crowd, and you only get to do this once, so soak it in. But when the ball goes up in the air, be ready to roll.

“I think our guys did that.”

“In the second half they just kind of put their will on us,” said Krauss. “Great atmosphere and great night. (It’s) just unfortunate. We gave it our best shot, but that team is the real deal.

“This game, win, lose, or draw, can only make us better.”

Williams led all scorers with 22 points, while Ramos dropped 16.

Of the five Indians who scored, four were in double digits, led by Rotroff with 18 points. Armstrong had 16, Seiler scored 15, and Gype added 11.