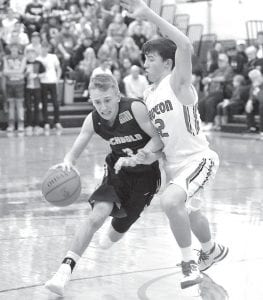 Eli Miller (3) pushes the ball up the court against the defensive pressure of Wauseon’s Trent Armstrong.– photo by Mario Gomez

Wauseon took control in the final minutes to earn the hard-fought 60-54 nonleague contest.

“Typical first game,” said Doug Krauss, AHS head coach. “A lot of things you can see that you did well and a lot of things that we’ve got a lot of room for improvement.

“It was a good learning experience. This game doesn’t hurt us one bit.”

Archbold took an early 5- 0 lead on a Bryce Williams jumper and a Kaiden Bedsole three-pointer.

After the Indians took the lead 15-12, Williams and Caleb Wooley scored the final four points of the quarter for a 16-15 advantage. 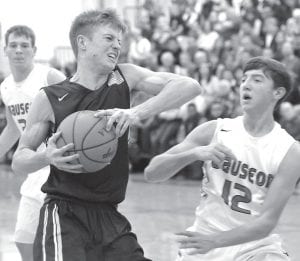 Bryce Williams muscles his way to the basket past Armstrong.– photo by Mario Gomez

After an Eli Miller three gave Archbold a 23-19 lead with 5:18 left in the half, Austin Rotroff, Wauseon’s 6-8 big man, helped the Indians get the momentum back by scoring on a dunk, free throw, and layup to go up 24- 23.

Archbold outscored Wauseon 9-7 to end the half and take a 32-31 lead into the locker room.

It was a fairly quiet third quarter with Wauseon outscoring Archbold 6-4 to lead by one going into the final eight minutes.

With AHS trailing 39-36 after a pair of Wauseon free throws, Williams nailed a three to tie the game.

Brooks Gype scored on a layup and hit a trey to give the Indians a 44-39 lead.

The teams exchanged baskets throughout the period, allowing the Indians to maintain a five-point lead until Ramos drained a three to close AHS within two, 50- 48.

After a pair of Wauseon free throws, Williams scored on a traditional three-pointer to pull Archbold within one, 52-51.

The Streaks had the ball with 1:05 left, but missed a shot that would have given them the lead.

The Indians moved the ball around and found Rotroff open for a dunk. He was fouled on the play, sending him to the free-throw line.

Rotroff missed but Gype was there to snatch the offensive rebound, and the Streaks had to foul, sending the senior guard to the foul line. He drained two more free throws for a 56-51 lead with 27 seconds remaining.

Archbold scored on a Williams three-point play, but the Indians went 6-6 from the foul line in the final seconds to preserve the 60-54 win.

“We love this Archbold game, obviously, with the rivalry, but also with the hype leading up to the game,” said Chad Burt, WHS head coach. “It was two teams competing at a very high level.

“I thought second half– third quarter in particular– we rebounded a lot better but we couldn’t find the offense,” said Krauss. “We kept ourselves in the game by guarding better and getting rebounds.

“We talk to our guys constantly to just go out and play hard and let the chips fall where they may.”

Rotroff led all scorers with 20 points. Gype scored 15 and Levi Seiler had 10.