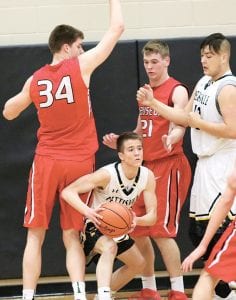 Down by 20 points at the beginning of the second half, the Pettisville boys basketball team attempted a comeback against Wauseon but fell short in front of a soldout crowd in the Bird Cage, Saturday, Feb. 17.

Ranked sixth in Division IV in last week’s statewide poll, the Birds clawed their way back to a nine-point deficit, but could come no closer as the undefeated Indians (21-0), ranked number one in Division II, were victorious 59-44.

“I’m proud of our kids. I thought we battled hard to get ourselves back in the basketball game, but we just have to learn from it and move on,” said Brian Leppelmeier, PHS head coach.

“I told the kids in the locker room, I really liked their effort.

“When our backs were against the wall there in the second half, (and Wauseon) looked like they were ready to put it away, we stepped up, started being a bit more physical, started finishing around the rim, hit a few timely outside shots, and got some stops, and got ourselves back in the ballgame there for a while.” 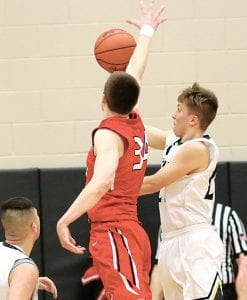 Canidate Vickery drives the baseline for a shot, but Austin Rotroff blocks it.– photo by Mary Huber

In the first sell-out since the new Pettisville school opened in 2011, the Birds hung with the Indians in the first half, down 16-11 after one and 30-22 at the half.

The third period was a killer for PHS.

After the teams traded baskets to open the second half, Wauseon went on a 12-2 run to take a 44-26 advantage into the final eight minutes.

“The start of that third quarter is not what we wanted, especially with a team like Wauseon,” said Leppelmeier.

Austin Rotroff, Wauseon’s 6-foot-9 center, scored the first bucket of the fourth period to put Wauseon up by 20, 46-26.

After Justin Rupp hit a three for Pettisville, Rotroff’s put-back put Wauseon up 48-29.

Graeme Jacoby started the run with a basket, followed by a deuce from Rupp. Jacoby hit another basket and one of two at the foul line. A Rotroff charge put Jacoby at the foul line for a one-and-one where he made both shots.

Rotroff committed his fourth foul with 3:48 left, and Jacoby hit one of two free throws to pull Pettisville within nine.

As the final seconds ticked off the clock, fans from both sides gave the teams a standing ovation.

“Once we got him (Jacoby) the touches, and Graeme sat down and posted up, I thought he did a good job of finishing and getting to the free-throw line,” said Leppelmeier.

Pettisville’s Detric Yoder, who was shut out of the scoring column in the fourth quarter, led all scorers with 17 points. Jacoby added 12.