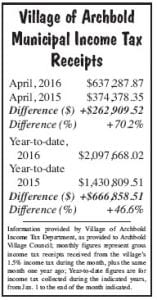 Archbold municipal income tax collection was unusually large for the month of April, Archbold Village Council learned at its Monday, May 16 meeting.

Howell called the increase “up quite a bit.”

But he cautioned council that the performance is not what village officials will see for the rest of the year.

In year-to-date terms, income tax revenue topped $2 million at the end of April. During 2015, the tax collection didn’t break the $2 million mark until May.

The ordinance requires property owners, or those who occupy a residence, to remove snow and ice from sidewalks within 48 hours after a snowstorm.

The penalty for failing to remove snow from a sidewalk can be a fine of up to $500.

Ed Leininger, a councilman, said he had been approached by one man who said council had, in some cases, placed an undue burden on some residents.

When council rebuilt some streets, it elected to build sidewalks on only one side. That, the man said, placed an undue burden on those residents who have a sidewalk on their property.

“He’s right,” Leininger said. “Are we being fair to residents on both sides?”

Fryman said that the village clears snow from bike paths, which, in effect, creates a burden on the rest of the town.

Fryman said two retirees who walk through the village said they can point out which residents do not normally shovel their sidewalks.

Kenny Cowell, a councilman, said he routinely walks at 5 am, and can point out the homes where sidewalks are never shoveled.

The department chain of command was interrupted when Joe Wyse, police chief, suffered a stroke in September 2015.

Fryman said Ross has vacation time scheduled, and wants two supervisors in place before taking the time off.

Terry Mull, a sergeant, is the other supervisor.