Income Tax Down, But Don’t Be Alarmed:Dettling 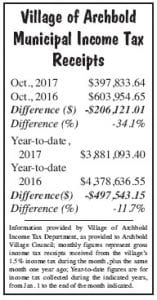 Revenue from the Archbold Municipal Income Tax is down, but Donna Dettling, village administrator, told council not to be alarmed.

Speaking at the Monday, Nov. 6 council meeting, Dettling said while the year-todate figures for September and October were down from the same months in 2016, and “you can’t compare (2017 to) 2016.”

She explained that in 2016, state law required public entities like the village of Archbold to begin collecting income taxes on a monthly basis, compared to a quarterly basis.

Showing a report, she said, “If you look at the report, you’re going to understand the value of going to monthly collections. It’s so much easier to predict where you’re going to land, because the numbers don’t go all over the place.

She anticipates that total income tax revenue for 2017 will be about $4.3 million, “which is awesome.

“It looks good. 11 percent (down) shouldn’t alarm anyone. It doesn’t alarm me,” she said.