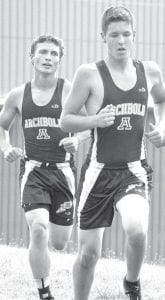 The Ida Bluestreak boys team won with 56 points, with three runners finishing in the top 10.

Ayersville was second with 72, and the host Archbold Blue Streaks were third with 108.

The Ida Bluestreak girls team was victorious with 37 points. Just like the boys team, they had three finish in the top 10.

Edgerton was second with 72, and Blissfield, Mich., took third with 80.

Logan Garrow was the first Blue Streak to cross the finish line. He placed fourth in 17:26.

Emily Roth was the first Archbold runner to finish. She placed 31st in 23:21.