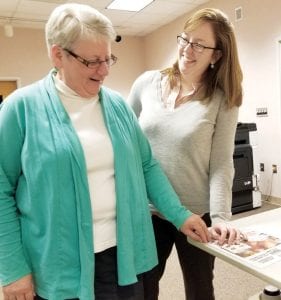 Joyce Klingelsmith, left, retiring Archbold Community Library director, with Sonya Huser, her successor. Huser said she is not planning to make big changes to the library right away. “I figure if there were needs for major changes, she (Klingelsmith) would have done them,” Huser said.– photo by David Pugh

What started as a desire to illustrate childrens books eventually led to a career in the world of libraries for Sonya Huser.

The Archbold Community Library Board previously announced Huser was selected to head the library.

She succeeds Joyce Klingelsmith, who has been at the helm for about 28 years.

Huser earned a bachelor’s degree in fine arts and history with a minor in art history from Indiana University, Bloomington, Ind.

“Originally, it was because I wanted to illustrate kids books,” she said.

Later, she earned a master’s degree in library science from IU.

“Joyce was saying… the thing she’ll miss the most was finding… the information (someone is) looking for that they could not have found on their own,” said Huser.

“I remember back to my first interview (with the Archbold Library Board). That was like almost exactly the same thing I said.

“My most rewarding part of being a librarian is helping someone find what they needed, whether they knew it or not.”

Huser was a school librarian for six years in the Muncie, Ind. school system.

But then there were “budget cuts and school closings. Then I ended up as a youth services specialist librarian in the Muncie Public Library,” she said.

“I had already applied for this job and did an interview. That really helped me see that I was making the right choice– public libraries.”

She chose to come to Archbold because, “I just had a really good rapport with the board from the very beginning as a first-time director.

“I was looking at small places, anyway. That’s just how it is” in the field for first-time library directors.

“It’s kind of like that area on a smaller scale.

“My dad still lives in Goshen. My mom lives in Cincinnati. I’m still within a few hours, and I’ve still got a lot of people close by.”

Huser said she has had a chance to get familiar with some of the challenges Ohio libraries face, such as the rise and fall of state support.

Are there improvements she wants to make right away?

“No. Right now I just kind of want to sit back and see what’s going on, because, I assume, that things are the way they are for a reason. I figure if there were needs for major changes, she (Klingelsmith) would have done them,” Huser said.

“I’m not trying to shake people out of their comfort zone just yet. I’m sure there will be changes, but nothing quite yet.”

In the age of the Internet, when a regular torrent of information is just a few clicks away, has the need for a library passed?

Quoting Klingelsmith, Huser said, “Well, from the statistics, what she said is people aren’t using the library any less, they’re just using it differently.

“So maybe we need to change how we keep the stats.

“I would say that librarians are as important, if not more important, than ever, because the information you can find online– just because it’s there, doesn’t mean it’s accurate.

“You can find what you need on Google, maybe, but you can find a whole bunch of stuff that you weren’t looking for.”

Are the physical, bricksand mortar library things of the past?

“No, I think it’s still necessary,” Huser said. “I wouldn’t do away with library buildings yet. I just think we might be in a transition time.”

“Oh, I love it. I love that it’s all one room so you can really see what’s going on anywhere in the building at a quick glance,” she said.

“This is a great building, definitely.”­­­ David Pugh