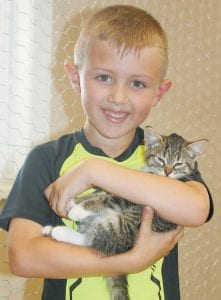 For Steve Wanner, the Fulton County Humane Society is about bringing dogs, cats, and people together.

That, and separating kids from their phones.

“We’re living in an electronic age. I see too many kids walking around with their nose buried in a smart phone.

“A lot of parents don’t have the time to have pets now. So if we can get them some contact with pets, get them around pets, maybe I can help the pets and help the people.”

A lot of those who volunteer at the Humane Society are teenagers.

“The younger ones, if they’re under 13 or 14, their parents are coming with them and that’s great. It’s good to see a parent” involved, he said. 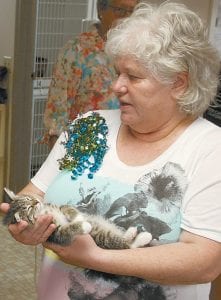 Wanner and his wife, Tracey, started with the Humane Society at the beginning of the year, when the director of the Fulton County Humane Society took a job and didn’t have the time to com- mit to the effort.

“We heard about it through a second person, and they asked if I would be interested because I was retired and had worked with an (animal) rescue before,” he said.

A new board was formed, and the original board dissolved.

The new Humane Society was registered with the state of Ohio in April.

The “this” he is referring to is a former dog boarding kennel building north of Wauseon at the intersection of St. Rt. 108 and Co. Rd. J.

“We came up here, my wife and I, and figured if we could get it for a decent price, that we would buy it,” he said.

“Since I was the director of the Humane Society, I would lease it to the Society for a dollar a year just to make it legal. So I’m not only the director, I’m the landlord,” he said.

“I think people were waiting for somebody to put their mind where their mouth was for a Humane Society.

“We’re both very happy. My wife still works parttime, but she still loves the cats enough that she comes here, usually smiling, to clean up.

“Usually, even if I’m in a bad mood or whatever, once I get in the kennel area and they (dogs) start barking because they’re excited, it just puts me in a good mood.”

The Society won’t euthanize dogs or cats to make room for more.

“If they’re healthy and they’re adoptable, they’re here until… whatever,” he said.

“I’m not going to get rid of someone to make room for somebody else. Once they’re here, they’re here.”

The Humane Society will take dogs from the Fulton County Dog Pound, but only after other rescue groups have had their first choice.

“But it gets to the point, you’ve got the ones people don’t necessarily want.”

“Big dogs. A lot of people don’t want big dogs. So we take them. You know, they’re great dogs,” he said.

The Humane Society will take dogs surrendered by their owners. But if there is no more room available, it will turn animals away.

“There is an over-population of cats,” Wanner said.

“It’s a shame. We’ve got up to 31 cats, and my wife was spending three or four hours a day taking care of them like you’re supposed to and she said, ‘We’re at capacity.’

“We had to turn people down. They said, ‘Well, you’re a Humane Society, just take ‘em,’ but even if we could, there’s a surrender fee because they’re going to have to be spayed and neutered.

“It overwhelmed us. We weren’t quite ready for something like that.”

Wanner estimated the Humane Society is about a year away from receiving grant funding for spay and neuter programs to try and address the cat situation.

“Hopefully we can remedy that in the future. We (need to) get somebody working for us that knows how to file grant” applications, he said.

The Humane Society has gotten a lot of support from businesses.

“A lot of them don’t want any publicity, because they say once people find out, then everybody wants to knock on their door,” Wanner said.

What does the Humane Society need?

Wanner said an educated guess is about $2,000 a month is needed to operate.

No one will get paid working for the Fulton County Humane Society. All the money that comes in goes to either taking care of the animals or the building.

Wanner admitted the humane society is “a sevenday a-week job.”

He has three dogs and three cats at home, but when he gets up in the morning, “I’ve got to get here (the Humane Society building), because they (the dogs) have been here all night by themselves. I’ve got to get there.

“And even if I’ve got a headache or I’m in a bad mood or something, I walk in here, I see them get all excited, they start jumping up, they all start barking, and I just get a smile on my face.”