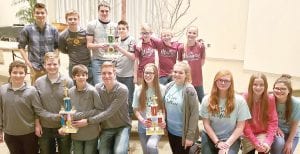 In its first year of Bible quiz, “Huioi,” King’s Cross had a great season going 14- 5-1, but was never one of the top two scoring teams of the six season meets.

However, “Huioi” put together eight wins and only two losses– both to “Wave Walkers”– and captured the local tournament, Sunday, March 10.

A highlight for the team was having Brayden Tilley quiz out for the first time this season in its opening match.

After going 10-9-1 and finishing seventh in the season, «5 Talents,» Pettisville Missionary, led by first-year quizzer Zander Stamm, charged through the tournament with six wins, losing only to “Huioi” three times to finish third in the triple elimination brackets.

Finishing 11-8-1, “Several Skin Diseases,” North Clinton, had an amazing day, considering it was quizzing without its leading scorer. The team was one of the last two teams in the winner’s bracket and lost only to the top three teams to finish fourth.

Area teams will be hosted in the homes of Logan County area quizzers and supporters for a large invitational, March 15-17, that also includes teams from Wayne County, Pennsylvania, and Virginia.