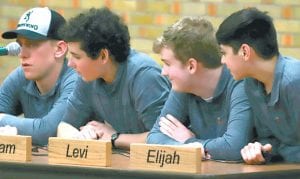 Area Bible quizzers had the most success in years at the 2019 triple-elimination 72-team tournament, Saturday and Sunday, March 16- 17, at Bellefontaine.

“Huioi,” Kings Cross 1, raced through the brackets to place fourth, the best finish from the area since 2011.

The team started with three wins in the winner’s bracket before losing two heartbreakers, 85-80 and 95-90, when its opponents got team bonuses to score 30 points on the 14th question.

Falling into the thirdchance bracket, Kings Cross had a run of six wins, including an upset over a Calvary Monument team that had just won its 55-team local tournament in Lancaster, Pa., six days prior.

The match was a true team effort.

William Nofziger quizzed out on question 7, and correct answers by Elijah Delgado, Levi Baus, and Brayden Tilley gave “Huioi” a team bonus on question 11 and an 85-45 lead before Baus and Delgado each scored again, putting the match away, 105-65.

Eastland Baptist, who has been the area…………..’…………..s top team in the tournament the last two years, won six matches to move up from a 2018 11th place finish to ninth this year. Members include Trinity Snider and sisters Lydia, Grace and Faith Sheldon.

“Five Talents,” Pettisville Missionary 2, went 6-4 to finish 13th. In its match against Christ Our King from West Liberty, Zander Stamm quizzed out in question 5, along with scores by Sammy Ruffer, Joshua Norr and Hyatt Stamm, to give a team bonus on the way to a 120-55 win. Carson Bennett also quizzed on the team.

After the match, a Christ Our King quizzer praised the quizzing of Pettisville Missionary as one of the fastest matches she has experienced in her six years of quizzing.

Based on the number of points scored during the season, the team from Central was seeded third of the 72 teams participating from Ohio, Pennsylvania and Virginia.

Quizzing without one of its leading scorers, Central won three matches with Pettisville sophomore Justice Beck quizzing out in all seven matches.

The invitational was won by Bowmansville 1, from Pennsylvania. Second place went to Orrville from Wayne County, and third place to Calvary Monument 1, from Pennsylvania, which beat “Huioi” in two matches that were not decided until the last question.

The Old Testament stories of Joseph and Esther was announced as the material for the 2020 invitational at the Lancaster Mennonite Bible College in March 2020.