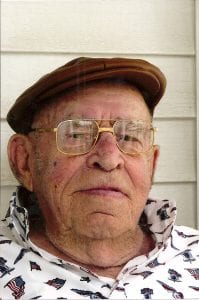 Howard L. Pfost, age 95, of Wauseon, passed away Thursday evening, Nov. 13, 2008 at Heartland of Wauseon.
Mr. Pfost, a former teacher at Haviland, Oregon and Toledo schools, had been superintendent of schools of Tontogany and high school principal at Swanton before becoming superintendent of Fulton County Schools in 1954.
During his 18 years in that office, he employed the first supervisors, first psychologists, and organized the first special education classes. During his tenure there was also extensive reorganization of local districts, the number going from 14 to six.
During these sometimes stormy years, he held (at his request) 18 consecutive one-year contracts.  He told the board if they didn’t like what he was doing, he’d be long gone.
He was one of the originators of, and served on, the steering committee for Four County Joint Vocational School.
Mr. Pfost was born on Dec. 3, 1912, the son of the late Lawrence N. and Edna A. (Mohr) Pfost.  On June 10, 1940, he married Alice F. Bibler, and she preceded him in death in 2007.
Mr. Pfost attended Defiance College, BGSU, and received a B.S. degree from Findlay College and an M.A. degree from the University of Michigan. He lettered in football and baseball at Defiance College in 1931-1932, and served 2 1/2 years in the Army, chiefly at Camp Atterbury with the 1584th Special Training Unit, and was discharged as a staff sergeant.
Recent summers were spent fishing and sailing on Crooked Lake near Petosky, Mich.
Surviving are two sons, Jim (Cathy) of Wauseon, and Tim (Barb) of Archbold; and a daughter, Edna Lou (Ted) Lauber of Waterville.  Also surviving are four grandchildren, Eric of Columbus, Jamie (Joe) Sinclair of Hammond, Ind., Pat (Becky) Lauber of Waterville, and Matthew Lauber of Cincinnati; two great-grandchildren; and two brothers, John of Scott, Ohio, and Ed of Salt Lake City, Utah.
He was a member of Christ United Church, the Masonic Lodge, the Laubach Society, and was a former member of the Kiwanis and Exchange Club.
Funeral services were held at 11 a.m., Monday, Nov. 17, 2008 at Christ United Methodist Church in Wauseon with Pastor Hap Itson officiating. Interment will be in the Wauseon Union Cemetery.
Online condolences may be made to the family at www.GrisierFH.com.–Posted 11.16, 7:10 p.m.