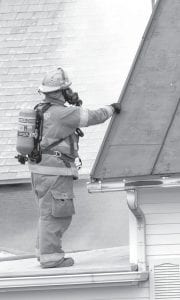 A firefighter in protective clothing combats smoke billowing from a second-story window of a home on Co. Rd. 26-2 that caught fire Tuesday, Aug. 27. Jerry Zimmerman, who lived in the house, suffered serious burns.– photo by Mary Huber

Brodbeck, the first to arrive at the scene, said he found Zimmerman standing in the front yard.

ALS-1, the Archbold-based paramedic unit, examined Zimmerman, then called for a helicopter ambulance to fly him to the St. Vincent Mercy Medical Center, Toledo, where he was still hospitalized on Friday.

When firefighters arrived, they attacked the fire in the kitchen of the older two-story wood-frame home owned by Ron Dean, 8518 Co. Rd. 26-2. However, flames had worked their way into the walls and had traveled to the second story and attic. Firefighters had to tear out interior walls to find and stop the fire.

Brodbeck called for assistance from the Fayette, West Unity, and Alvordton fire departments, then called for additional manpower from Wauseon.

Paramedics from ALS-1 set up a rehabilitation station for firefighters so they could rest, get some fluids, and have their conditions monitored.

Fire crews were on the scene about three hours.

The origin of the fire has been traced back to the kitchen, possibly on or around the stove, Brodbeck said.