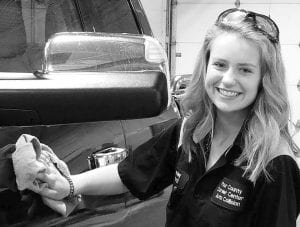 Carley Horst, an AHS junior, wipes down a vehicle door at the Four County Career Center lab for auto body repair. She is one of three girls in the auto body program. She said when she told her family she was entering the auto body program, they were surprised. “They thought I was a ‘girly girl,’” she said.– photo by Pam Graber

Carley Horst, an AHS junior, knows her own mind.

She was so sure that she wanted to study auto body collision repair at Four County Career Center that when she learned the class was already full, she turned down any alternatives.

“I think it was the second or third week before we could get her in,” said Steve Hootman, classroom supervisor.

“That would have been a shame. She’s a hard worker.”

When school officials offered her career alternatives, “She told the school, ‘Nah, if I can’t have auto body, I might as well stay at the high school,’” Hootman said.

Horst got interested in auto body repair by following her dad, Al Horst, around.

“I grew up around it. I watched my dad do it, so automatically, I was interested in it. I decided to come to Four County, and I love it!” Horst said.

Horst plans to use her training by “taking it into the body shop, doing it the best that I can, and hopefully, own my own body shop someday.”

Her training will serve her well.

“If I need more training, like in a certain area, the body shop will take care of that,” Horst said. “I shouldn’t need to go to any other training school.”

Currently an employee of Auto Images, Archbold, Horst plans to work there full-time over the summer.

In the fall, she will participate in the Bridge program through the Four County job placement office, where she will go to school for academics in the morning, then work at Auto Images in the afternoon for on-the-job training.

Following graduation, she will have a full-time job to step into.

“I will continue there for a while, and then maybe move on to something bigger, maybe in a bigger city,” Horst said.

How did her friends react when she told them she was planning to go into auto body repair?

“They were surprised. My family was, too. They couldn’t believe it. They thought I was a ‘girly-girl,’” Horst laughed.

“The boys thought it was cool, but they didn’t think I would (actually) go into (the auto body program).

“There aren’t a lot (of girls in the program) at all. It kind of depends on the person.

“Some will just go through (the program) to have something to do. They won’t actually do it.”

Currently, only two other girls– both seniors– are in the program, but Horst feels very accepted by her classmates.

Her favorite task so far?

“I love painting,” she said.

“There are two paint booths. We have to turn (the fan in the paint booth) on, either summer or winter depending on the temperature outside, and then it will ventilate all the paint (fumes).

“We have respirators and other necessary things, too” because the chemicals in automotive paints and finishes are toxic.

Other things she’s learned to do at Four County in the bodywork field include “dent removal – like popping them out, applying body filler and icing (applying a thin coat of body filler), painting and refinishing, buffing and polishing, sanding, wet sanding, everything,” Horst said.

“Just tearing a car up from top to bottom and redoing it.

“It makes me a little nervous (to go out and actually do the job), just because I haven’t gotten put in so many different situations, but I think I’m confident I can do it.

“I’ll definitely get into it more in the summer.”

Horst would encourage other girls to go into her field “as long as they can hold their own, just because there are a lot of men around you, so you just have to be on your own,” she said.

“It’s fun. It builds your confidence.

“I think people are afraid to get their hands dirty, so they don’t want to do it, but it’s really not that bad.

“The jobs (in auto body repair after graduation) aren’t scarce, but the people to fill them are, so there’s a lot of opportunity in the field.”