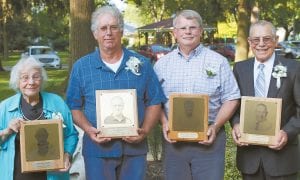 Inductees of the 2019 Fulton County Agricultural Hall of Fame are, from left: the late William “Bill” Hoops, represented by his widow, Marjorie; Lee Leininger, Emerson Nafziger, and William Schmitz.– photo by Mary Huber

Four men were inducted into the 2019 Fulton County Agricultural Hall of Fame at a ceremony at the Ruihley Park Pavilion, Monday, Aug. 19.

The annual event recognizes selected farmers or agribusiness leaders from Fulton County who have committed 25 years or more of service to the agricultural industry in the county, state or region.

Hoops, of Pettisville in German Township, gave a lifetime of service to the county agricultural community as a dairy farmer and agricultural youth mentor.

After he got out of the service at age 21, he went straight into the dairy farming life. He started with only a few cows and grew his herd to 35 cows.

As a dairyman, he was awarded various prizes for milk production and quality from the local and state associations.

Dairying is what jumpstarted his love and commitment to the agriculture community in Fulton County.

Hoops worked to get the best use out of his land and helped others to do that as well.

He was one of the first and few that safely and effectively started custom applying anhydrous ammonia nitrogen to corn in the area.

Not only would neighboring farmers hire him to apply nitrogen, but also to do custom straw baling.

Custom farming allowed for reduction in the cost of equipment and helped Bill create lifetime relationships in agriculture.

It was important to him that everyone had the chance to live and enjoy the agriculture life as he had while he lived on the farm.

He was one of several that helped start the local Pettisville Ever-Ready 4-H Club, which has grown to one of the largest clubs in the county.

He also was supportive of the local FFA chapter. He was always willing to make sure an interested youth could attend a conference or get an FFA jacket, even if they could not afford it.

Hoops was a well-loved member, supporter, board member and men’..s group leader at the First Church of God in Wauseon. He was a member of Gideons International and was involved on the boards of WPOS Christian radio station, Pettisville FFA Alumni, the Dairy Association, and the Defiance Production Credit (now Farm Credit).

He and his wife, Marjorie, were married for more than 60 years, and they had four children. He died in July 2014.

He was always an hon- est and dependable man with a great sense of humor. He cared about people and always did what he said he was going to do.

Nafziger’……….s interest in agriculture and agronomy began on the family farm, southwest of Pettisville in Fulton County.

His impact on Midwestern crop production has been felt through his corn and soybean research, academic writing, and Extension teaching to farmers and with students throughout the Corn Belt.

Nafziger earned agronomy degrees from Ohio State University and Purdue University, and eventually his Ph.D. from Illinois, where he spent the majority of his career.

Since 1993, Nafziger has been a professor of crop sciences at the University of Illinois Extension. He is responsible for Extension programs in corn, soybeans, and small grains, where he delivers programs to producers, crop advisors and students.

He created a data-driven nitrogen rate calculator, an online resource that assists producers in improving nitrogen management for corn in most of the largest cornproducing states.

It is considered one of few exclusive books on corn and soybean production in the nation.

In the academic arena, Nafziger has written more journal articles and completed more research projects than one can count– all related to corn and soybean production.

Nafziger has instructed local farmers at the Annual Northwest Ohio Corn & Soybean Day and at the Conservation Tillage Conference in Ada.

He is a member of several national agronomy societies and has been recognized on the national level with several industry and academic awards.

Nafziger is an active member of his local church, its mission relief agency, and the choir. He and his wife Cynthia have two adult sons, all in Champaign, Ill.

Leininger is known for his involvement in the Fulton County Dairy Association and the National Red/White and Holstein Associations.

He believes in developing and maintaining relationships with local and surrounding county farm neighbors to share knowledge, equipment and facilities to advance the local agriculture industry.

In his dairy career, Leininger developed five generations of excellent and nationally respected Red/White and Black/White Holstein cows – both high in type and milk production components.

In 2014, he was named the premier breeder at the Spring Dairy Expo Red/ White Holstein show in Columbus. He was an early adopter of sexed semen technology which, when applied to his cows, helped him achieve a very high conception and heifer calf rating.

Leininger has exhibited dairy cattle 55 years at the Fulton County Fair, and has helped many 4-H and FFA dairy kids by mentoring, providing equipment, loaning dairy stock and giving his expertise.

Over the years, he has been a valuable contributor to the one-on-one education that takes place with the public at the fair dairy barn and parlor.

Leininger continues to give to the Fulton County Fair in many ways by donating flowers to decorate the dairy exhibit.

He has volunteered his time in support of past Fulton County Breakfast On The Farm events.

Leininger has also worked hard to provide opportunities for youth to participate in the agriculture industry through 4-H, FFA and farming activities.

Schmitz,……. of Lyons in Royalton Township, lives a life dedicated to farming.

His 60-plus year career as a farmer has lead him to endeavors in drainage, excavating, specialty crops, row crops and agricultural fabrication, just to name a few.

He can tell stories of farming his first tomato field with horses, laying drainage tile for neighbors, and today, farming with some of the most advanced farm machinery in the industry.

He has always been one of the first people to try new techniques that would better the farm.

Schmitz.. was a pioneer in laying some of the first plastic drainage tile in the 1960s and eventually being one of the first to use lasers for tile installation.

He has helped neighboring farmers dig ponds for water solutions on their farm fields, in livestock barns and for a domestic water source.

Today, he continues to help fabricate fertilizer toolbars with the next generation.

In 1947, Schmitz… was awarded the Outstanding Tomato Grower Award by the Campbell’…s Soup Company, and throughout the 1950s and 1960s, he continued to be a top tomato grower.

Today, his operation has grown to be one of the largest in the county, focusing on corn, soybeans and wheat.

Schmitz. is an outstanding member of the Lyons community and always supports those in need.

He has served on Our Lady of Fatima Church Council and is a member of Holy Trinity Catholic Church in Assumption.

Schmitz. has opened his home to the local 4-H club for many years, served on the Evergreen School Board and Evergreen School one campus committee, and continues to support young people in Lyons.

He and his wife, Mona, have been married for 67 years. They have created a large family, most of whom reside here in Fulton County.

Schmitz’s.. legacy will be that so many of his children and grandchildren continue to be involved in agriculture here in Fulton County.