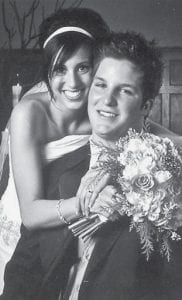 A reception followed the ceremony at Founder’s Hall, Sauder Village.

The bride is the daughter of Steve and Chris Rupp, Archbold. She works at the Southern Breeze salon, Wauseon.

The groom is the son of Dan and Julie Stuckey, Archbold. He works for King’s Construction, Pettisville.

The couple resides in Archbold.