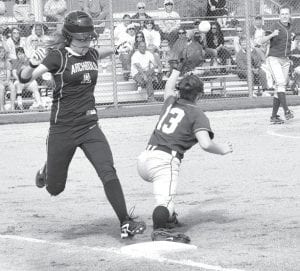 The victory gave AHS its seventh straight championship and 19th title in 26 years of league competition.

The Streaks opened Division III tournament play with a 14-1 win over Tinora, Thursday, May 10, in a sectional final.

The Streaks jumped out to a 4-0 lead in the first inning and cruised to a 6-1 win over the Bears.

A Bryan error, two singles, and a Morgan Cody two-run home run gave Archbold the fast start it was looking for.

Although the Streaks collected only five hits, they added two insurance runs in the sixth without the aid of a hit. Base-running was another key as Archbold swiped six bases.

Bryan batters were completely stymied by the pitching of Hanna Allison, who shut the Bears out on two hits in the six innings she pitched. Returning from a shoulder injury, Allison struck out six and walked only one.

First baseman Megan Gerig makes the catch for an out in the sectional final with Tinora.– photo by Mario Gomez

Hannah Kern pitched the seventh and gave up only an unearned run.

“It was nice to be able to win the title by ourselves,” said Joe Frank, AHS head coach. “We certainly earned the title, and this team did it in very impressive style.”

The Streaks hit five homers in the first inning while scoring 10 runs to put the game away early.

Becca Gerig led off the bottom of the inning with a homer and Chelsea Goebel laid down a perfect bunt single. Cassidy Wyse followed with a two-run homer, followed by Allison and Cody homering to give AHS three straight home runs.

The Streaks batted around in the inning, which was capped off by Wyse hitting her second home run for a 10-0 score after one.

Wyse led off the third with her third homer of the game, tying a state record.

Cody hit her second homer of the game two batters later to close out Archbold scoring.

Allison pitched and gave up one unearned run on five hits while striking out one.

Wyse was 3-3 with three home runs and five runs batted in. Cody was 2-3 with two homers and two RBIs.

“What an unbelievable way to start the game,” said Frank. “I have never seen anything like it.

“Hitting five homers in a game is unheard of, and we hit five the first inning.

“All of the credit goes to the kids, although I would like to give coach (Dan) Rychener some credit as well. He does an outstanding job in work- ing with the kids and their swings and is very positive and encouraging with them.

“My other assistant, coach (Greg) Kuhlman, also deserves credit for the job he does with our pitchers. I am very blessed to have such a great staff.

It is the Wildcats’ first time to advance into the district tourney.

Ottawa-Glandorf (14-9) was scheduled to play Coldwater (13-11) in the other district semifinals at Lima Bath yesterday, Tuesday.

The district finals are scheduled for Saturday, May 19, 12 p.m., at Lima Bath.

“We will have to put this game behind us and use the confidence that we have in our next game,” said Frank.

“Kenton plays in the Western Buckeye League, and that is good preparation for a D-III team to make a tourney run.

“I am confident that our team will represent our school and their community well as we head to Lima to compete.”