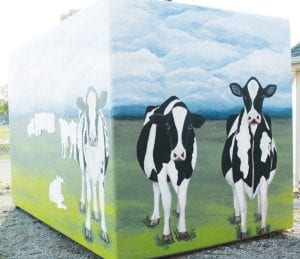 Above: the partially completed south and east sides of the freezer painted with a rural Henry County dairy farm mural. Left: Sue Hurst, Ridgeville Corners, adds some personal touches to one of the dairy cows on the mural.– photos by Mary Huber

Visitors to the Henry County Fair may have already “herd” that some cows have mooved in permanently.

She started on Monday, July 9, and planned to have the east and south sides of the freezer painted by the time the fair opens Friday.

They gave Hurst some sketches, and she took it from there.

Initially the Producers wanted the south side paint- ed, but Sue thought it was best also to paint the east side, “since it would be visible from the midway.

The south side is only visible from the grandstand and track,” she said.

It took two days to paint the sky. Because the freezer had a textured fiberglass finish, she didn’t want to use a roller, so she used a brush. 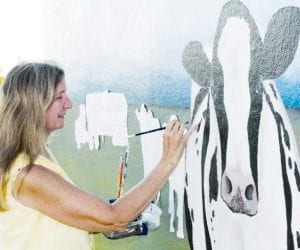 “I really felt it in my arm muscles afterwards, brushing that all on,” she said.

Over the next few days she painted the greenery, “knowing that was just the background… that the cows would go on top of it.

“Then I took pictures of our cows from our herd. I blew them up and drew patterns, cut out the patterns, traced them on (the freezer) and painted them. Some of these cows have had several makeovers.”

The mural gives the freezer a “cowsmetic” enhancement, as well as a perfect photo opportunity for children.

Sue is a “lifelong Henry County girl,” having grown up near Ridgeville Corners.

The daughter of Phyllis and the late Vernon Hesterman, she attended the Ridgeville School until it consolidated with Archbold. She graduated from Archbold High School in 1973.

Sue attended Adrian (Mich.) College for two years, but didn’t finish. She married Steve Hurst in 1976, and they started their family in 1979.

When their oldest child, Laura (Bickel, now a biology teacher at AHS) started kindergarten, “I knew I wanted to be a teacher,” Sue said. She got her degree from Defiance College in 1989.

After teaching at Tinora one year, she joined Archbold Area Local Schools in 1990, teaching middle school art. Six years later, she took the high school art position, and has been there ever since.

When she was younger, Sue got “Best of Show” in the obstacle course with her horse, “Steel.” Her father was a horse lover.

She also had sewing, cooking, and gardening 4-H projects.

Her husband Steve is a dairy farmer, having taken over the dairy herd of his father, Ray. Sue and Steve’s children showed calves and cows at the fair for about 15 years, beginning when Laura was nine years old.

Sons Andrew and Daniel also brought rabbits, chickens, ducks, and pheasants to the fair before they started showing cows.

Now Sue has an eight-yearold granddaughter who wants to show a calf next year.

Sue’s first memories of the Henry County Fair are of “walking around, it being night, and eating cotton candy, and the sounds of the fair and the lights of the Ferris wheel.

“And I was allowed to buy a baton that had fringe on the ends. It was like the best thing ever!

“Mostly I remember coming as a family.”

“I love the exhibits,” she said. “I always have to check out the art exhibits; that seems to have grown over the years. And the 4-H exhibits and the vegetable growing exhibits, and now they have the wine-tasting exhibit… that’s something new here at the Henry County Fair.”– Mary Huber