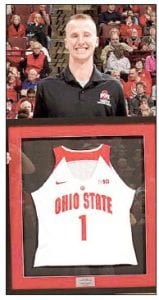 Logan Hogrefe, AHS ‘15, is a manager for The Ohio State University women’s basketball team. Saturday night, March 2, he and two other senior managers were honored during the team’s Senior Night game.– courtesy photo

Logan Hogrefe, AHS ‘15, son of Doug and Lori, has been involved in the game of basketball much of his life.

He played on Archbold teams during his years in middle and high school.

When he went to college at The Ohio State University, he stayed in the game, but in a different role.

He was a practice team player, and later, a manager for the OSU women’s team.

“Back at a high school graduation party, coach (Doug) Krauss told my dad and I” about the position, he said.

That “gave me the idea of being a manager down here for the team.

“So I just started reaching out to some people, and my sophomore year, I was a practice team player.

“For women’s basketball at the college level, they have a male practice squad that comes to practices, kind of as a scout team against them.”

A scout team takes on the role of an upcoming opponent during practice sessions. It runs the same offense and defense the opponent will use against the team, so the players have experience against those offenses and defenses.

A practice player has to be good, because he’s up against college-level talent.

When he was on the practice team, he played against Kelsey Mitchell. When she graduated late year, “she was the second all-time leading scorer in NCAA (National Collegiate Athletic Association) history” with 3,402 points.

Today, Mitchell is a point guard for the Indiana Fever of the Women’s National Basketball Association.

“I was practicing against her every day, guarding her, going up against her and everyone on the team,” he said.

At the college level, “there’s a lot more talent, so that was awesome. It was a lot of fun.

“It definitely kept me in shape, kept me getting some practice in. It was great competition we were playing against every single day.”

His junior and senior years, Hogrefe has been a manager, doing “some of the basic things you would think of– getting stuff set up for practices, games, cleaning stuff up after practices and games.

“Some of us would come up to the office basically every day when we’re not in class, and just kind of hang out.

“The coaches will have a bunch of different stuff they need to have done,” he said.

“Then at games, we… have some different tasks. Some give out water bottles; we take stools out during timeouts.

“I help the coaches out a little bit more, doing scouting during the games– just some different stuff like that we each help out with.”

As a game scout, Hogrefe said he watches the opposing offense and defense, seeing “what they’re doing, so as we see it happening, we can kind of help the coaches out, tell them what to expect.”

“That way we can relay that to the girls out on the court so that they kind of have a heads-up, an idea of what’s coming, to prepare for what the other team is about to run.”

Hogrefe said working with the team has been an awesome experience.

“The three years I’ve been with them, every girl has been super nice, super friendly. They’re appreciative of what we do,” he said.

“We’ll hang out with them. Obviously on the road when we travel places, we go to meals and do a lot of stuff as a team.

“But even when we’re not on the road, there’s plenty of time we just hang out with them.”

Hogrefe is a business major, specializing in operations management. Next year, he starts graduate school, shooting for an advanced degree in sports management.

While he could work at any level, he hopes to be at the college or professional sports levels.

Saturday, March 2 was Senior Night. He and two other senior managers were recognized on the floor.

“The team doesn’t have to do anything for us managers, but I think it just kind of shows what the team’s like, the coaches are like, and everyone is like, that they’re willing to do that and take the time to honor us like they did,” he said.

“I love it all,” he said. “I don’t complain about any of it. I love it every single minute I’m doing it, ever since I’ve started.”