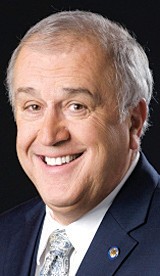 Cliff Hite, the Ohio state senator representing Henry and parts of Fulton counties, has resigned, and now there is an element of possible sexual harassment involved.

Hite’s letter of resignation letter made mention of health concerns, but regional newspapers released a statement from Hite, and his wife, Diane, saying he had inappropriate conversations and hugs with a female state employee.

A press release from Larry Obhof, Ohio Senate president (R-Medina), said Hite (R-Findlay) “submitted his resignation to me on Monday evening, and I accepted it, effective immediately.

“I will announce an application process for selecting a replacement for the 1st District Senate seat by the end of the week.”

Hite’s Senate district covers all or parts of 11 counties. Williams and Defiance counties are included.

In his resignation, Hite said, “It has been an honor and privilege to serve my constituents and the people of Ohio.

“I look forward to focusing on my personal health and spending time with my family.”

A statement, signed by Hite, dated Tuesday, Oct. 17, published on regional newspaper websites, says, “I’m not proud of recent inappropriate conversations that I had with a state employee who did not work for me but worked in a nearby state office.

“After we met, I sometimes asked her for hugs and taked with her in a way that was not appropriate for a married man, father, and grandfather like myself. Beyond those hugs, there was no inappropriate physical contact.

“I recognize that this was inappropriate behavior. She deserves more respect than that and so does my wife.

“I am proud of my long career as a teacher, coach, and legislator, but I’m not proud of how I acted with this person.”

Referring to his health, Hite added in the statement, “As I’ve said previously and in recent public statements I’ve been seriously ill over the last year, have been hospitalized for seeral days, and I am now facing two different surgeries scheduled for next month.

“I just don’t have the strength to contine to travel back and forth from Northwest Ohio to Columbus each week and make my way around such a large Senate district.

“The combination of my mistake in judgment and my failing health led me to decided to step down, so someone else can represent the good people of my district.”

Diane Hite’s statement said, “I love my husband and he’s a good man, but he made a mistake here. He told me all about it, apologized to me, and I forgive him.

“We don’t have a perfect marriage and, like so many couples, we’ve had some hard times in our relationship.

“We’re in counseling now, and we’re hopeful that both our marriage, and Cliff’s health will get better.”

Hite was in his third term in the Ohio Senate. Press reports say he was planning to seek a fourth term in 2018.

He served two terms in the Ohio House of Representatives before being appointed in 2011 to fill the 1st District Senate seat left vacant by Stephen Buehrer, a Delta native who was named head of the Ohio Bureau of Work- ers’ Compensation.

Buehrer has since left that post to join a law firm.

A quarterback on the University of Kentucky football team, Hite graduated and went on to teach high school history and coach football in schools in Ohio and Kentucky, including 13 years at Bryan High School.

While in the Senate, he was chairman of the Senate Standing Committee on Agriculture.

Hite was involved in efforts to establish a violent offender registry program following the July 2016 murder of 20-year-old Sierah Joughin.

In September, Hite introduced legislation to ease setback restrictions on commercial wind turbines. The setback requirement had been about 1,300 feet from neighboring homes.

In 2014, the figure was changed, without debate or public input, to almost 4,000 feet, effectively stopping wind turbine development in the state.

“In my district, wind is our shale,” he was quoted as saying.