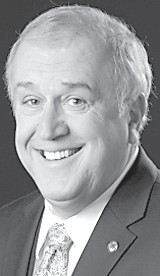 Cliff Hite, the Ohio state senator who resigned suddenly Monday evening, Oct. 16, has admitted he had “inappropriate conversations” with a female employee.

However, he said he has been seriously ill from two surgeries scheduled for November, and lacks the strength to keep up with his Senate obligations.

Hite (R-Findlay), who represented all or parts of 11 counties including Williams, Defiance, Henry, and part of Fulton (not including Archbold), said in a statement Tuesday, Oct. 17, that after meeting the woman, “I sometimes asked her for hugs and talked with her in a way that was not appropriate for a married man, father, and grandfather like myself.”

Beyond the hugs, Hite said there was no physical contact.

“I recognize that this was inappropriate behavior. She deserves more respect than that, and so does my wife,” Hite said.

In a statement released through the Ohio Senate website, Obhof said the Senate Republican Caucus is responsible to fill the seat by appointing a temporary replacement, who will fill the remainder of Hite’s current term, which expires in December 2018.

If the replacement intends to remain in the Senate, the person must run for election in 2018.

Applications for Hite’s seat will be accepted until 4 pm, Monday, Nov. 6.

Hite’s wife, Diane, said in a separate Oct. 17 statement, “I love my husband and he’s a good man, but he made a mistake here. He told me all about it, apologized to me, and I forgive him.

“We’re in counseling now and we’re hopeful that both our marriage and Cliff’s health will get better.”