Josh Wyse, Archbold, right, tangles with another racer during stock light class action at Sunday’s kart racing in Archbold. This scene was repeated several times by many drivers as they fought for positions.- photo by David Pugh

In fact, Herschberger was the only local kart racer to end the day with a feature win at the Sunday event, held on the parking lot at Terry Henricks Chrysler Dodge-Jeep.

Herschberger was second in the first heat of junior econo, won his second heat, and won the feature.

The race is normally in the summer months. This year, the event was postponed until October due to rain.

“The engines seemed to prefer the cooler weather, but of all of our (chassis set-up) notes, nothing worked. We were scratching our heads all day,” Huffman said.

“Herschbergers said theirs didn’t work great until the feature,” he said.

Even with their softest tires mounted, all of the karts experienced understeer, or a “push,” Huffman said. 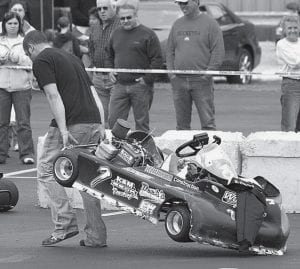 Josh Wyse, Archbold, appears dejected as he drags his kart off the track. It broke down during stock light class action. Unlike bigger racers, which requires a tow truck, two adults can lift a race kart.- photo by David Pugh

A total of 127 karts showed up for the Archbold event. Huffman said among those racers were some of the best of the best.

Indeed; Herschberger had to go up against Jeremy Mann, 11, Archbold, a local junior econo class hot shot with multiple feature wins to his credit.

And of course Huffman, himself a track champion at two tracks.

This year, rather than using bales of straw to line the track, promoters went with concrete barriers, with wrapped straw bales in key places.

Huffman said the concrete barriers caused most drivers to “respect” the walls.

When a kart brushes up against straw, the straw tends to pull the kart in, causing a crash. A racer brushing the concrete barriers tends to bounce off back onto the track. 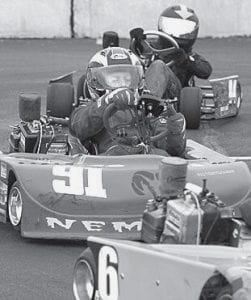 Tyler Herschberger, Pettisville, wheels his kart, No. 91, through traffic during junior econo class racing action. The 12-year-old was the only local driver to win a feature during the Sunday Archbold kart race.- photo by David Pugh

Chris Wheeler, Wauseon, holds the dubious title of worst crash of the day. In between the third and fourth turns, Wheeler’s kart drove onto another racer, got up on two wheels, then crashed nose first into the concrete.

Wheeler stumbled from his kart but gathered his wits, got his racer pointed in the right direction, and continued on, only to encounter the wall a second time later. That second encounter sent him to the pits.

Huffman said Wheeler later went to a hospital emergency room to have his injuries tended.

Huffman said despite cool temperatures and cloudy skies, there was a good crowd on hand, including Sam Hornish, Jr., Indy 500 winner and past Indy Racing League Champion.

Hornish, an AHS grad, got his start in racing in karts, competing against many local racers.

(Note: Results for local racers for Sunday’s event will be presented in a future issue of this newspaper.)- information provided by Lavon Herschberger and John Huffman, written by David Pugh