Henry County Senior Citizens Of Year Dedicated To Helping Others 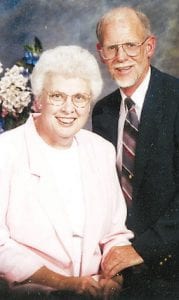 Teaching. Mentoring. Visiting people in crisis. Entertaining. Making things by hand for others.

For Dick and Norma Beck of rural Ridgeville Corners, much of their lives have been dedicated to service.

Not bad for Dick, a 1960 graduate of Ridgeville High School, who said when he was a student he was so shy he would do anything to avoid having to stand up in front of a class.

Today Dick and Norma are the 2012 Henry County Senior Citizens of the Year.

The award is announced during Senior Day festivities at the Henry County Fair.

The Becks have led unconventional lives.

Norma lost her first husband, Barney Arps, to lung cancer, but he got to see all five of their children graduate from high school before he died.

“That was an accomplishment,” she said.

Dick was divorced, and raised his three sons and a daughter as a single dad.

A retired farmer, Dick said when he got divorced, “farming went south. My income went way down, and for about three years, we would cut every penny.”

The couple met singing in the church choir. She was 53 when they married; he is six years younger.

“Getting saved just turned my life around completely,” he said.

In fact, he feels he’s had two lives– one before he was saved, and one after.

“I was extremely shy growing up. There was no way you could get me up in front of a class; I would do anything to get out of that.”

Dick is the more outgoing of the two, doing things involving much interaction with others.

“But a lot of the time, she gets called out,” he said.

He also puts on a program called “Tunes and Trivia” at the Senior Center and at Alpine Village, an assisted-living facility which is part of the Lutheran Home in Napoleon.

“That’s kind of a fun thing. Shortly after high school, I got interested in collecting records, buying the hits and things, so I’ve had them over the years,” he said.

“I had all these records sitting here yet. I’ve probably got 3,000 of them.

“I’ve been getting those out for the seniors. I’ll pull some out, all kinds of music, mix ‘em up, and they guess who the artist is, and what year it was.”

As an elder at Peace Lutheran church, located north of Defiance, he’s done a lot of visitations, visiting with people who are ill or have other problems.

At age 60, Dick suffered from back problems so severe, “I just couldn’t do the work (for the family farm business) anymore, and the doctors couldn’t figure out what was wrong.”

But back surgery helped, and then he had to decide whether to return to work.

“I had been thinking about what I was going to do when I retired. I was already an elder, and I thought, ‘boy, this is going to give me more time to go out and meet with people, and do whatever I can to help.’”

Dick said what he really enjoys is one-on-one counseling with people.

“Twenty bucks can be a lot of money when you don’t have it, “ he said.

Norma does needlework, making things she donates to the senior center which are then sold to raise money for the organization.

She will also do needlework for others and take money for it.

“But it’s like giving it away, because she doesn’t charge enough,” Dick said.

“I had people who stepped up and raised me, because my parents couldn’t do it,” Norma said.

“I had foster parents, so I feel like I want to help somebody else out now.”

The two talk about getting older and slowing down, but the enthusiasm in Dick’s voice can hardly be contained as he describes working with and talking to people.

“He seems to thrive on that kind of stuff,” Norma said.

But she said, “Whenever he does have a day at home, he sits in the chair and goes to sleep.”