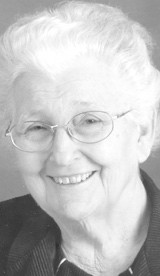 She was a 1949 graduate of Eureka (Ill.) Consolidated High School.

Joanne went to Goshen College for two years and then to LaJuata Mennonite School of Nursing in LaJuata, Colo., for three years. She received her bachelor’s degree in nursing from Goshen (Ind.) College.

After graduation, her nursing experience included the National Institutes of Health in Bethesda, Md., and Jefferson Medical Hospital in Philadelphia, Pa., where she was a nursing student instructor.

She later moved to Puerto Rico, where she worked in voluntary service for the Mennonite Mission Board. There, she met Lenin Rivera, MD, and they married in 1963.

After the wedding, they went back to Puerto Rico and Joanne worked in Lenin’s office in Aguas Buenas, Puerto Rico, and also as a head nurse at Presbyterian Hospital in San Jaun, Puerto Rico.

In 1968, they moved back to the states, living for a short time in Toledo before settling in Pioneer to open an office. Later Lenin moved his office to Montpelier, where Joanne worked as a nurse until Lenin retired.

While they worked in Montpelier, the couple lived for 29 years in West Unity, where they were members of Salem Mennonite Church in Waldron, Mich.

After Lenin’s death in 2002, Joanne moved to Archbold and attended West Clinton Mennonite Church in Wauseon.

Those planning an expression of sympathy are asked to consider memorial contributions to be made to Mennonite Central Committee (MCC) or Salem Mennonite Church, Waldron, Mich.