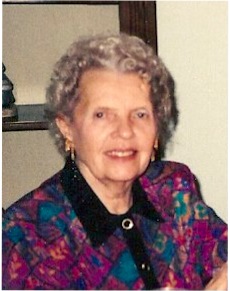 Helen E. Cook, age 91, of Archbold and formerly of Toledo, passed away Saturday morning, May 12, 2012, at Fairlawn Haven Nursing Home in Archbold.
Prior to her retirement she had worked as a waitress in downtown Toledo at Smith’s Restaurant.
Helen was born in Fulton County, Ohio, on Jan. 4, 1921, the daughter of the late Solomon and the late Ada (Balser) Miller.
In 1949 she married Dale Cook, and he preceded her in death in 1992.
Surviving is her stepdaughter, Lila Lands of Jonesboro, Ark., and nieces and nephews.
She was preceded in death by her husband, parents, one sister, Alice Rowe, and three brothers, Carl Miller, Gerald Miller, and Lowell Miller.
Funeral services will be held at 11:00 a.m., Wednesday, May 16, 2012, in the Chapel at Fairlawn Haven Nursing Home in Archbold, with Pastor Charles Gautsche, officiating. Interment will follow in the Wauseon Union Cemetery.
Visitation will be held in the Chapel at Fairlawn Haven Nursing Home from 9:00 a.m. until the time of service on Wednesday. The family requests that memorial contributions be given to Fairlawn Haven Nursing Home.
Online condolences may be offered to the family at www.grisierfh.com. Grisier Funeral Home in Archbold has been entrusted with arrangements.–Updated 5.13, 7:20 pm