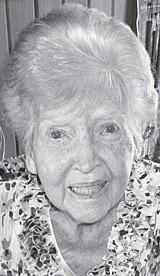 Helen Collins Kirby, age 92, went home to be with her Lord and Savior, Jesus Christ, Monday, July 10, 2017, in her home, surrounded by her family.

Helen was born on Oct. 24, 1924, in Reidsville, N.C. She was the daughter of the late Thomas and Bertha (Washburn) Collins.

She was a member of First Baptist Church in Wauseon.

Prior to her retirement, she was a lifelong missionary and homemaker. She and her husband, Verne, served as missionaries in the hills of eastern Kentucky for nine years, where they established Rogers Baptist Church in Rogers, Ky., and taught the Bible in 18 one-room schools.

After moving to Alaska in 1964, they served as missionaries in Anchor Point, Ketchikan, Eagle River, Anchorage, and Big Lake.

In 1986, their mission work continued in Hawaii.

After their retirement in 1995, they continued to serve the Lord in various areas including Scotland, Texas, New Mexico, Virginia, Kentucky and Ohio.

Preceding her in death besides her parents was granddaughter, Hollis Richer in 2007; sister, Deane Roach; and brother, Tom Collins.

Online condolences may be made to the family at www.GrisierFH.com.

The Edgar-Grisier Funeral Home in Wauseon has been entrusted with arrangements.