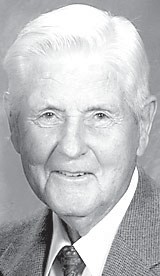 Heini Schoenhals, age 88, was born on Feb. 25, 1928, to Leonhard and Maria (Schnebele) Schoenhals in Rohrbach, Germany.

Heini was baptized in April 1947 and became a member of the Sembach Mennonite Church.

Heini grew up in a singing family, with their mother playing the pump organ. The siblings also played recorders and brass instruments together.

Yet God had a very special plan: in 1954, Heini and his young wife followed a call to come to Archbold to work at Hickory Grove farms, which opened the door for him to become a farmer.

He retired from active farming in 1997, but still enjoyed driving tractor whenever he was asked. After that he became a woodworker, making many beautiful pieces for family and for charity auctions.

After arriving in Archbold, Heini and Liesel became members at Central Mennonite Church, where he was very active as a song leader, elder, and Sunday School teacher for many years.

In addition, he served in migrant ministry and at the Maumee Youth Center.

Heini enthusiastically appreciated the many friendships and connections he made in this community and wherever he went across the country and the world.

Heini was preceded in death by his parents; brothers, Eugen and Hans Schoenhals; and sister, Ilse Schoenhals Bachmann Funck.

Heini always enjoyed having his family and friends around him, and especially cherished singing a few songs together before parting. Now we know he is joining the heavenly chorus.

Memorial services were held on Tuesday at 11 a.m. at the Central Mennonite Church with Pastors Dave Elkins, Regina Wenger and Dale Wyse officiating. Interment preceded at 9:30 a.m., Tuesday, in the Pettisville Cemetery.

In lieu of flowers, memorials may be given to Central Mennonite Church or to Eastern Mennonite Board of Missions General Fund, or to the donor’s charity of choice.

Short Funeral Home in Archbold was entrusted with the arrangements. www.Short FuneralHome.com.