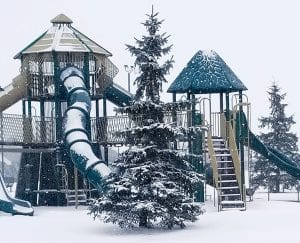 Archbold and Northwest Ohio got hit with a winter weather triple whammy over the past weekend.

Heavy snow fell on Saturday, along with high winds.

NWS records show that on Saturday, the maximum wind speed recorded in Fulton County was 31 miles per hour. That figure was recorded at 8:27 pm, about a mile northeast of Tedrow.

Saturday temperatures recorded at the plant ranged from a high of 30 degrees to a low of 0.

On Sunday, Jan. 20, the high reached 12 degrees; the low was 3, although some thermometers gave sub-zero readings. 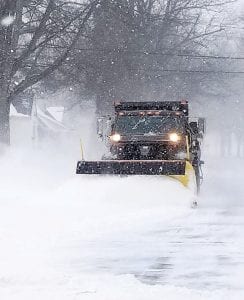 On Monday, the high was 13, while the low slipped to 5-below.

For Jason Martz, Archbold superintendent of streets, and his crew, the worst problem they faced was drifting snow.

“Lutz Road, Lafayette Street, and Nolan Parkway were the worst with drifting. They were blowing shut about every hour,” he said.

Street department crews spent about 12 hours plowing snow and spreading salt on Saturday. They took a break about 10:30 pm, then were back at work Sunday, clearing the roads.

Martz said while his crews spread salt on Saturday, he was concerned about trying to battle ice.

Salt wouldn’t work in the cold. He could have added calcium to the salt, but said he was afraid the road surface at intersections would melt, then refreeze, creating a sheet of ice.

“That’s why we have the hard pack out there now,” he said.

Josh King, township road superintendent, and Jeff Aeschliman, road maintenance worker, were both out Saturday and Sunday, dealing with snow.

“I thought they did an excellent job,” he said.

They, too, battled against drifting snow. In some places, Short said the wind blew snow off the road; in other places, there were large snowdrifts.

Short said King and Aeschliman used quite a bit of salt.

“Overall, the wind was a big challenge for us well into Sunday,” she said.

Crews shifted from a liquid deicing chemical mixture to salt or a mix of salt and other chemicals.

They, like other snowplow operators, had to fight against the rate of snowfall, which NWS put as high as two inches per hour.

“There were definitely periods where we were driving on snow-covered roads,” she said.

Dangelo said while some may have been upset that roads weren’t clear immediately after the snow stopped, ODOT crews met their own criteria for keeping roads open.

Today, Wednesday, Brown said NWS was expecting a large shift, with a high temperature near 40 degrees, rain, and wind gusts up to 30 miles an hour.

Then tomorrow, Thursday, he said there is a 30% chance of snow showers expected with no accumulation, with a high in the mid-20s and a low of around 7 for Thursday night.