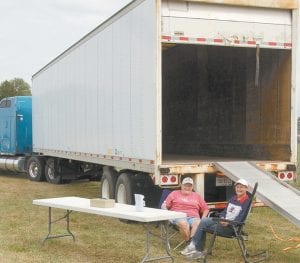 Fulton County is coming to the aid of the people of East Texas who were ravaged by Hurricane Harvey and its aftermath.

Even after Harvey lost hurricane status, its remnants wandered around the Texas and Louisiana gulf coasts, drenching villages and cities with as much as 50 inches of rainfall and causing catastrophic flooding.

As the victims struggle to cope with the epic flooding that resulted, Fulton County is doing its part to help the suffering.

North Clinton Mennonite Church put out a call last week to churches across western Fulton County, inviting them to join in a community effort for Harvey relief.

Donations are being collected at the church and at a semi parked along Co. Rd. J, on the north side of the Fulton County Fairgrounds. 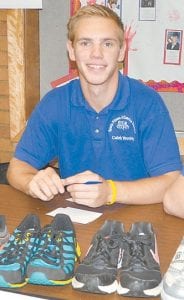 Coblentz said the church has access to as many as four semi trucks to take donated items to Texas, with their fuel and other costs covered.

When asked if there will be enough to fill more than one truck, Coblentz said, “It’s hard to say. Stuff is still coming in.”

When a truck is filled it will start the trip to Texas.

Once in Texas, Coblentz said North Clinton is working with three separate churches in the Houston area with which members of the congregation have personal connections.

The supplies will go to the places with the most need.

“Some people from our church said, ‘We really need to do something,’ so we said, ‘Let’s do it.’”

Coblentz said the church is not seeking accolades or glory from the effort.

“This is not about North Clinton. This is about the people of Christ. The Body of Christ needs to put hands and feet to what God calls them to do,” he said.

Some Archbold area churches are falling in with the North Clinton project; others are going other routes.

“We’re letting our congregation know they can send supplies over to North Clinton,” she said.

Steve Heatwole, a pastor at Lockport Mennonite Church, said the congregation there is being encouraged to give direct donations to Mennonite Disaster Services.

MDS teams of volunteers will travel to flood-impacted areas to begin rebuilding.

He said the Lockport congregation also is being made aware of the North Clinton effort.

Dana Short, office manager at Central Mennonite Church, said there is nothing in place specifically targeted toward Harvey. Members are urged to support Mennonite Disaster Services, who goes in after the immediate relief effort.

Christ Community is teaming with Victory Tabernacle, a church in New Castle, Ind., where his parents, Tim and Barbara, are pastors.

Tim Denny, one of Tim and Barbara’s co-pastors, has a daughter, Janie Crawford, who is with First Baptist Church and Outreach in Anahuac, Texas.

Anahuac was designated the “Alligator Capital of Texas” in 1989. The community is home to Porter Processing, which raises and processes alligators.

Pierce said there were 350 alligators at the processing facility that had escaped, but this newspaper could not independently confirm that.

“How could it get any worse?” he said.

Pierce said trucks full of relief supplies are bypassing towns like Anahuac as they head for Houston.

“It’s breaking their hearts,” he said.

Pierce said his parents already have been to Anahuac once, and are preparing to make another trip.

While there, they observed a man standing on a street corner, selling cases of bottled water that had been donated for $40 per case.

Pierce said his church is fortunate to have a connection with a church in a small Texas town, “a church that is the heartbeat of the community, that is doing what it is supposed to do, being the hands and feet for the needy.”

Jim Nathan, pastor at Archbold United Methodist Church, said it is organizing with other Methodist churches in its district and a neighboring district– about 200 churches altogether– to send relief supplies.

Nathan said there are two efforts. The immediate need is for flood cleanup supplies packed in five-gallon buckets (“flood buckets”).

Those supplies are sent to UMCOR, United Methodist Committee on Relief, which operates five distribution centers around the country.

One is located in Louisiana.

UMCOR, he said, partners with the Red Cross to distribute disaster relief.

Next year, he said, teams of volunteers will travel to the affected areas to help with reconstruction efforts.

He said the diocese office will collect supplies and send them to the affected area.

A statement from Daniel E. Thomas, bishop of the Toledo Diocese, said, “Catholic Charities Diocese of Toledo stands ready to accept your donations and will send 100 percent of the proceeds to our sister Catholic Charities on the ground.”

The shoes will go to flood victims.

Shoes will be collected until 4 pm, today, Wednesday.