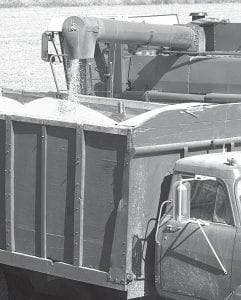 Sam Lauber, rural Archbold, unloads soybeans from a combine into a truck in a field near the Ohio Turnpike, Friday, Oct. 1.– photo by David Pugh

Compare those figures to a Fulton County five-year average of 166 bushels per acre.

“That’s not surprising with the weather conditions early on,” he said.

“Fields that were less well-drained suffered some pockets where plants were drowned out,” he said.

Then, late in the summer, as the corn plants were filling out their ears, dry weather “took a little off the top end of the yield,” he said.

Soybeans being harvested now were planted in early April before rain forced farmers out of their fields until late May and early June. Early soybean yield reports are 50 to 60 bushels per acre, against a county average of around 45 bushels.

LaBarge said there are a lot of “patchwork fields,” where parts of the field were planted early and have been harvested. Other areas in the same fields must wait until the soybeans are ready.

Yields were in the 65 to 90 bushels-per-acre range, compared to a five-year average of 78.

It’s time to plant winter wheat, but LaBarge said there are concerns about adequate soil moisture to get the plants started.

“It rained all day Saturday Oct. 2, but it was not very much. Hopefully, we’ll get a good shower to get the wheat started,” he said.

The markets for farm commodities “were actually fairly good, until a couple of days ago,” LaBarge said.

Future prices for corn dropped 50 cents, beans dropped as much as 70 cents, and wheat was off 40 cents, after a “less-than-favorable” government report on grain stocks.

The report stated there was more grain, particularly corn, in storage than anticipated.

“It’s not a disaster, but no one wants to see markets drop,” LaBarge said.

On the other hand, input prices– the costs of things farmers need to farm, such as diesel fuel for tractors, fertilizers, etc.– are starting to increase.

LaBarge said the prices of fertilizers, which were somewhat reasonable, have started to move up again.

A new problem for Fulton County farmers is the western bean cutworm.

The insect has been mov- ing across the country, from west to east. It started out attacking soybean plants, but then changed its habits and now finds corn to its liking.

LaBarge said other insects feed on corn ears, usually at the tip, but those insects are cannibalistic; only one insect per ear will survive.

The western bean cutworm is different, because it’s a good neighbor. Four or five can coexist on one ear.

LaBarge said Fulton County is still a year to two years away from becoming overly concerned about the western bean cutworm.

County farmers will look to Michigan, which has been dealing with the insect, to see what management practices are best to stop or slow the western bean cutworm.