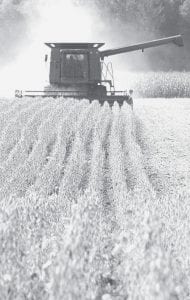 A combine makes quick work of soybeans in a field northwest of Archbold, Friday, Sept. 26. Greg LaBarge, Fulton County agricultural extension agent, said it’s still early in the harvest season, but reports say soybean yields are down. According to information from the Archbold Wastewater Treatment Plant, there were more than 50 days this summer without significant rainfall.- photo by David Pugh

Fulton County harvest season is underway, with farmers combining soybeans and some corn.

It’s still too early to get a feel for corn yields, he said.

This summer’s dry weather “is going to have an impact on yields.”

The severity will depend on the soil types in a particular field. Soils that tend to hold moisture, such as clay, will do better than many of the sandy ridges, which don’t hold water.

“Everything was looking good up until July 2. Then the rain shut off,” LaBarge said.

The Archbold Wastewater Treatment plant recorded 2.15 inches of rainfall on the morning of July 2, which covered the 24-hour period between about 8 am, July 1 and 8 am, July 2.

From that date, 56 days passed before Sept. 3, when signifi cant rain started falling.

The only recorded rainfall during that 56-day period was on July 19, when there were three-tenths of an inch, and Aug. 4, when there was twotenths. Trace amounts were recorded on six days.

Rain is predicted this week.

The dry spell in 2008 is “a totally different scenario” than the infamous drought of 1988.

“In 1988, there was an early to mid-season drought. Crops did not get established. We got our first rain in early August or late July.

“This year, we were getting regular rains until the first part of July, and the crops were able to get established.”

Earlier this summer, prices for soybeans and corn were reaching new highs. Since then, LaBarge said prices have backed off the highs, following the commodity price for crude oil.

But the farmer’s input costs have continued to shoot skyward.

“The price per unit of corn seed is about $300 a bag. Soybeans are about $60 a bag. Fertilizer prices have continued to increase. Anhydrous ammonia is now $1,200 a ton,” he said.

“It will be an interesting winter. Farmers will have to look at their budgets, their costs, and make some sound decisions based on price standpoints,” he said.

Among the county livestock producers and dairy farmers, “things have happened so quickly, prices have run up so fast,” that they haven’t had time to adapt.

LaBarge said livestock operations are going to be looking closely at alternative feeds, such as corn stalks, and putting rye in their crop rotation.

After harvesting wheat, they may plant oats for hay, or a mixture of sorghum and milo.

Another source of alternative feed is waste products from local food industries.

For example, one hog farm near a cookie factory feeds its hogs broken cookies that can’t be sold.

“All of that is being looked at,” he said.

With every harvest season, LaBarge said motorists need to keep a strong eye out for farmers and their machines.

That means slowing down and knowing which direction a tractor or combine is going before passing.

LaBarge said when a tractor is pulling two or three large gravity wagons, it’s difficult for the driver to see around them.- David Pugh