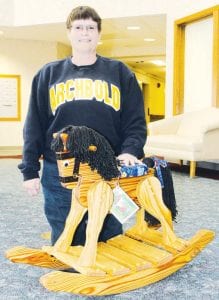 Bea Briggs, rural Archbold, with the 164th rocking horse she made. Briggs has donated rocking horses to the Fairlawn Auction for many years, but no one remembers exactly how long. She said 15 to 20 years was her best guess. The 2012 auction is Thursday and Friday, March 29-30.– photo by David Pugh

With the days winding down until the Fairlawn Auction, Bea Briggs, a retired Archbold High School science teacher, has added her annual donation, a handmade rocking horse.

Briggs has donated rocking horses to the auction for several years. In fact, no one is sure how long she has donated.

But she knows exactly how many she’s made. This year’s contribution is the 164th member of her “herd.”

“I started when I first got out of college. I had lots of cousins who were all getting married and having babies, and I didn’t have a lot of money to buy gifts.

That started the project rolling.

Some have gone as Christmas presents; some have been donated to other auctions.

“It all started just giving them away. I sold a few to help (pay for the project), and I’d go on to the next one.

“When I started making them, $25 would make a rocking horse. You could double that now, and it would not be enough.”

“It’s always fun to make something and give it away.

“I only have one requirement,” she said.

“I want a picture of the child on the rocking horse.”

Each of the rocking horses is unique, with different color finishes, yarns, and seat padding.

“Sometimes, people bring me material to use for the seats,” she said.

Rocking Horse Number 164 has a black mane and tail made of soft alpaca yarn. Briggs said her 89-year-old mother, who is also named Bea, makes the manes and tails.

The horse is made of yellow pine, finished with tung oil.

“I taught for 30 years, and in teaching, nothing is ever ‘done.’ With woodworking projects, it’s finished. You look at it, and say, ‘Oh, how pretty it looks! It’s done!’”

The bottom of each horse carries its number and the date.

On the horse’s left rump are the initials JRH, sort of like a branding mark.

The letters are initials for a cousin, John Robert Hogue, Maumee, who died in 1995 at the age of 19 after suffering from Crohn’s disease, an inflammation of the bowel.

Horse number 164 is the first to carry the initials BH on the right rump. BH stands for an uncle, Robert “Bob” Hogue, of Maumee, who died earlier this month. Auction

Briggs’ horse will rock across the stage during the live auction, Friday, March 30, at Founder’s Hall, Sauder Village.

A preview of auction items is Thursday, March 29.